Share
Facebook Twitter LinkedIn StumbleUpon Tumblr Pinterest Reddit WhatsApp Telegram Share via Email Print
Share
Turkish warplanes bombed Kurdistan Workers Party (PKK) targets overnight after the militants staged what appeared to be their deadliest attack since the collapse of a two-year-old ceasefire in July, killing as many as 16 soldiers.
The PKK said it had killed 15 members of the armed forces in Sunday’s attack on a convoy in the mountainous Daglica area of Hakkari province, near the Iraqi border. A security source told Reuters 16 soldiers had been killed, which would be the highest military death toll in a single attack for years.
The surge in violence has torn apart a peace process which President Tayyip Erdogan launched with jailed PKK leader Abdullah Ocalan in late 2012 in a bid to end an insurgency that has killed more than 40,000 people.
Erdogan condemned the attack in a statement and said in an interview late on Sunday on the A Haber TV channel that the fight against the PKK would now become more determined. He said 2,000 PKK militants had been killed since the conflict resumed.
The clashes are just weeks before a snap election on Nov. 1 in which the ruling AK Party is hoping to regain its parliamentary majority.
The unrest, which also comes as Turkey joins U.S.-led air strikes against Islamic State insurgents in Syria, has raised questions of how security can be guaranteed for the vote.
The uncertainty has unnerved investors. The lira currency dropped to record lows against the dollar early on Monday.
“Two of our armoured vehicles suffered heavy damage after the detonation of hand-made explosives on the road. As a result of the blast, there were martyrs and wounded among our heroic armed comrades,” the military said in a statement.
It did not give a death toll.
SPECIAL FORCES
Two F-16 and two F-14 jets struck 13 PKK targets and military operations were continuing “decisively” despite very poor weather after the attack, which occurred as the security forces were clearing roadside bombs planted by the PKK, the general staff said.
The security source said that after the militants detonated explosives along the road, a clash broke out between the soldiers and fighters from the PKK, designated a terrorist organisation by Turkey, the European Union and United States.
Military operations continued early on Monday, with helicopters dropping special forces in the mountainous area, while drones sought out militant targets to be hit by warplanes.
Prime Minister Ahmet Davutoglu chaired an emergency meeting with military and intelligence chiefs and ministers on Sunday night in Ankara following the attack, cutting short a visit to the city of Konya to watch the national soccer team play.
“The pain of our security forces who were martyred in the treacherous attack by the separatist terrorist organisation sears our hearts,” Erdogan said in his statement, adding he believed the Turkish people would unify and take a “decisive stance” against threats to national security.
The election would go ahead, he said.
The clashes mark a crescendo in attacks since July, which officials said had already claimed the lives of more than 70 members of the security services and hundreds of PKK militants.
The PKK launched its insurgency in 1984 with the aim of carving out a state in the mainly Kurdish southeast. It has since moderated its goal to boosting Kurdish political rights. 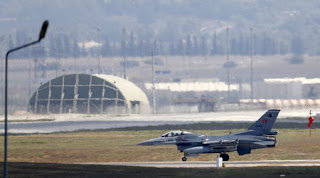