Share
Facebook Twitter LinkedIn StumbleUpon Tumblr Pinterest Reddit WhatsApp Telegram Share via Email Print
Share
Saudi-led coalition jets bombed a Houthi military position and army bases in the Yemeni capital Sanaa through the night and into Sunday morning in what appeared to be further retaliation for the killing of dozens of coalition soldiers two days ago.
The air strikes targeted troops loyal to former president Ali Abdullah Saleh, an ally of the Houthis, and a Houthi base in what was the al-Imam University, a religious school in northern Sanaa, residents said.
Residents said explosions could be heard all night and buildings had been levelled, but the bombing stopped around noon. A Reuters reporter said there were unconfirmed reports of two deaths.
The al-Sabeen maternity and children’s hospital said it had also sustained damage, with patients trapped inside by the bombardment, and appealed to international organizations to help it evacuate patients.
“The hospital had been badly damaged due to the bombardment of areas around it,” the Houthi-run state news agency quoted a hospital statement as saying.
The Saudi-led coalition says it does not target civilian facilities. But on Saturday, at least 27 members of two families were killed in Sanaa by air strikes targeting Houthi positions in the city, according to hospital officials.
DEADLY ATTACK
On Friday, the Iranian-allied Houthis had attacked a weapons storage facility in Marib, where forces loyal to exiled President Abd-Rabbu Mansour Hadi had been massing troops and equipment in preparation for an assault on Sanaa.
The attack killed 45 soldiers from the United Arab Emirates (UAE), five Bahrainis, 10 Saudis and four Yemenis.
It was the heaviest toll suffered by the Saudi-led alliance since it began its air war in March to try to restore Hadi to power after the Houthis began advancing on his main base, the southern port city of Aden.
Hadi was installed in 2012 under a Gulf Arab-sponsored deal that saw Saleh, Yemen’s leader of three decades, step down after months of street protests. He fled Sanaa when the Houthis seized the city almost a year ago.
UAE forces were important in helping Hadi’s forces drive the Houthis and their allies out of Aden, a big win for the Arab coalition.
But security has yet to be restored in the port city, where unidentified vandals dug up several graves and smashed headstones at a cemetery that Britain, the city’s former colonial ruler, had maintained after it left some 50 years ago, a local official said.
A local Yemeni official accused the Houthis of hiring the vandals to destabilize the city and prevent order returning. The Houthis say al Qaeda is operating in areas under Hadi’s control. 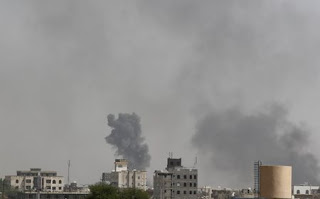