Share
Facebook Twitter LinkedIn StumbleUpon Tumblr Pinterest Reddit WhatsApp Telegram Share via Email Print
Share
Jarryd Hayne thanked God in his first tweet after learning that he had made the final roster for the San Francisco 49ers, bringing him within tantalizing reach of his NFL dream.
As a 27-year-old rugby league player with no prior experience of American football, the Australian’s mission to defy the soul-crushing odds would truly seem touched by the divine.
“Crazy,” was his astonished manager’s response last year when Hayne spoke of walking away from a wildly successful career in Australia’s National Rugby League competition.
His manager’s skepticism was shared by many in the sports-mad nation where Hayne tearfully announced in October he would leave home-town Sydney and his long-time club, the Parramatta Eels, to pursue an improbable American dream.
Few Australians follow NFL closely, but plenty are aware of the glitz of the Super Bowl, the eye-popping player salaries and the cut-throat nature of American sports.
A big fish in his small home pond, Hayne would head to the United States a bottom-feeder, though one endowed with extraordinary talent and a fierce determination.
Less than two percent of the 70,000 players at American colleges can hope for a professional career but like a typical California dreamer, Hayne felt he had nothing to lose.
“I didn’t feel like (my career) was challenging me to the point where I’ll now be challenged,” he said before jetting off.
The son of a Fiji rugby league international, Hayne was born with football in his veins but his effortless rise into the NRL elite sprang from a childhood of adversity.
He was raised in government housing in Sydney’s working class west by a single mother who grafted hard to help her son build a career in the top-flight.
A high school drop-out, Hayne had a stunning debut season as an 18-year-old NRL rookie in 2006 but literally dodged a bullet two years later.
Out drinking with team mates, Hayne was caught up in a drive-by shooting in Sydney’s notorious Kings Cross nightclub district.
Shaken by the incident, Hayne became a devout Christian after a visit to his father’s homeland Fiji and won the NRL’s ‘Dally M’ medal as the competition’s most valuable player the following year.
An explosive fullback whose raised-arm celebrations after scoring became known as the ‘Hayne Plane’, he secured a second Dally M medal in 2014.
The idea of further success in the parochial league left him cold, however.
After taking some low-profile training sessions with local American football players, Hayne dropped his NFL bombshell in October, reasoning that his prowess as a fullback in rugby league might lend itself to a new career as a running back.
Meeting the 49ers’ Jim Tomsula would prove a pivotal moment, with the coach having experience dealing with rugby converts during a past stint in NFL Europe.
“He struck me as a bright guy. He struck me as a fearless guy,” Tomsula told Australian broadcaster Fox Sports on Sunday.
“He walked away from that to try something new. That’s very courageous. It takes a lot of guts but also takes a lot of confidence.
“If you’ve got those two things you can do a lot.”
Hayne impressed scouts at a number of NFL clubs but he signed a three-year contract with the 49ers as an undrafted free agent in March, another milestone on a long journey.
In the end, it took just two pre-season appearances for Hayne to mark himself indelibly as an NFL contender, with his highlights in the 49ers’ number 38 jersey going viral.
The hype raging in his home country began to infect seasoned American pundits.
“For a guy that was a rugby player, I’ll tell you he’s really a football player,” Hall of Fame NFL coach John Madden told American radio.
The 49ers can be assured of a fiercely loyal fan-base from Australia if they name Hayne for his NFL debut against the Minnesota Vikings, and Tomsula relished the attention his unlikely recruit had brought.
“He’s by no means a finished product,” he said. “But the type of person he is and the approach he has taken, he’s the kind of player we want here.” 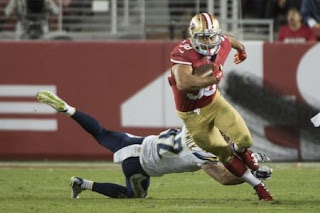