Share
Facebook Twitter LinkedIn StumbleUpon Tumblr Pinterest Reddit WhatsApp Telegram Share via Email Print
Share
There is a shared belief among the members of the Group of 20 leading economies in the need to “double down” against competitive currency devaluation and avoid it in both policy and language, a senior U.S. Treasury official said on Saturday.
Speaking to reporters on the sidelines of the G20 meeting of central bankers and finance ministers in the Turkish capital Ankara, the official also said that China appears to have learned about the importance of transparency in the communication of monetary policy from its latest market turmoil. 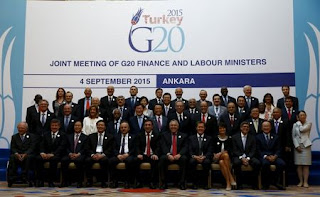