Share
Facebook Twitter LinkedIn StumbleUpon Tumblr Pinterest Reddit WhatsApp Telegram Share via Email Print
Share
For days the government had blocked them from travelling by train, but it relented after many began walking towards the border on Friday.
About 4,000 people arrived in Austria, with many moving on to Germany. Meanwhile a second group has set off on foot from Budapest towards the border.
Austria says the migrants can apply for asylum there or carry on to Germany.
The move comes as European Union countries are struggling to agree on how to deal with a surge of asylum seekers – many of whom have fled conflict in Syria.
Hungary’s government eased restrictions on transit after many frustrated migrants overwhelmed police cordons.
Overnight, buses picked up migrants from Keleti station in Budapest where thousands had been camped.
Vehicles were also sent to take those who had decided to walk along a motorway to Austria.
On Saturday Hungarian government spokesman Zoltan Kovacs told the BBC there would be no more buses or trains to take the migrants on to Austria.
He said the transport had been arranged as a one-off, because of fears for the migrants’ safety.
reports from Budapest that the government’s move seems to have encouraged migrants who later streamed into the station.
The second group of about 1,000 migrants is now on its way to the border.
As the thousands crossed the border on foot, some Austrians displayed welcome signs.
Austrian Red Cross workers at a makeshift centre greeted the migrants with blankets and tea.
“I feel [at] home,” said Ayaz Morad, one of the first to arrive. “This is a great land – nice people, nice government.”
The migrants are now being taken to Vienna by bus and rail. Special trains to the capital are leaving the Austrian border town of Nickelsdorf every half hour.
Many hope to travel on to Germany, which says it expects 6,000 people to arrive over the weekend.
The German government has said anyone arriving from Syria can apply for asylum. 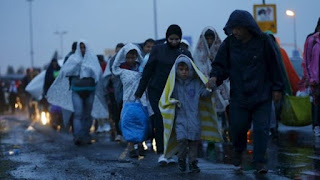 To make a change you need to take the bull by horn, the New Nigeria.