Share
Facebook Twitter LinkedIn StumbleUpon Tumblr Pinterest Reddit WhatsApp Telegram Share via Email Print
Share
SpaceX plans to keep its Falcon 9 rocket grounded longer than planned following a launch accident involving the unmanned booster in June, the company president said on Monday.
The privately held company is owned and operated by technology entrepreneur Elon Musk, who earlier this summer was targeting the Falcon 9’s next flight for September.
“We’re taking more time than we originally envisioned, but I don’t think any one of our customers wants us to race to the cliff and fail again,” Gwynne Shotwell, president of SpaceX, said at a webcast panel discussion at the AIAA Space 2015 conference in Pasadena, California.
She said the company was “a couple of months away from the next flight.”
The June 28 accident, which destroyed a cargo ship bound for the International Space Station for NASA, is believed to have been triggered by a flawed support strut in the rocket’s upper-stage engine.
The metal strut broke about two minutes after the rocket lifted off from Florida, releasing a bottle of helium that over-pressurized the second-stage engine. Seconds later, the rocket exploded over the Atlantic Ocean.
The accident, along with the failed Oct. 28 launch of an Orbital ATK  Antares rocket on another station cargo run, has left the U.S. space agency dependent on Russian and Japanese freighters to resupply the station, a $100 billion laboratory that flies about 250 miles (400 km) above Earth.
SpaceX also has been cleared to compete against industry stalwart United Launch Alliance, a partnership of Lockheed Martin and Boeing to fly U.S. military satellites.
SpaceX has a backlog of nearly 50 launches, worth more than $7 billion, on its schedule.
The cause of the June accident is “an easy problem to go fix,” Shotwell said, adding that the company wanted to take extra time to “make sure we’re not seeing something like that anywhere throughout the vehicle or the supply chain.”
The next mission on SpaceX’s launch calendar had been a U.S. government ocean-monitoring satellite called Jason 3, but Shotwell indicated that a commercial communications satellite would move to the front of the line.
Luxembourg-based SES SA has a contract to fly on the first Falcon 9 rocket that features an upgraded first-stage engine.
The upgrade will allow SpaceX to attempt to land its rockets back at the launch site from high-altitude missions so they can be refurbished and reused.
The Jason 3 satellite is slated to fly aboard the standard Falcon 9. 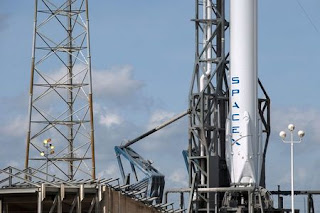 Women are not getting treated for menopausal