Share
Facebook Twitter LinkedIn StumbleUpon Tumblr Pinterest Reddit WhatsApp Telegram Share via Email Print
Share
Fla — Center fielder Kevin Kiermaier hit the go-ahead home run in the bottom of the sixth inning to lift the Tampa Bay Rays to a 3-2 win over the Kansas City Royals on Sunday at Tropicana Field.
The Rays’ bullpen combined for four shutout innings, with Xavier Cedeno (3-1) earning the win. Brad Boxberger pitched a perfect ninth inning for his 32nd save of the season.
Luke Hochevar (1-1) took the loss for Kansas City, which failed to sweep the season series against the Rays.
The Royals had runners on first and third with one out in the top of the eighth inning, and designated hitter Kendrys Morales hit a slow chopper down the first base line that appeared to be foul. But Rays first baseman James Loney fielded the ball and threw to catcher Rene Rivera, who tagged Ben Zobrist out at home and then tagged Morales, who never left the batters’ box for a 3-2 double play.
Tampa Bay (64-66) opened the scoring in the bottom of the first inning when right fielder Brandon Guyer scored on a RBI single from left field Joey Butler to give the Rays a 1-0 lead.
Kansas City scratched across two runs in the top of the third with RBI singles by Zobrist and center fielder Lorenzo Cain. The Royals loaded the bases with two outs, but Rays starter Nathan Karns escaped the jam by getting third baseman Mike Moustakas to ground out to first.
The Rays tied the game at 2-2 in the bottom of the third when Guyer hit his sixth home run of the season off Royals starter Danny Duffy.
Karns gave up two runs on six hits and struck out five on 91 pitches (58 strikes).
Duffy gave up two runs on seven hits and struck out six on 99 pitches (70 strikes). 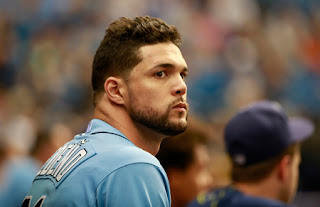