Share
Facebook Twitter LinkedIn StumbleUpon Tumblr Pinterest Reddit WhatsApp Telegram Share via Email Print
Share
Left fielder Michael Cuddyer atoned for a costly misplay in the field by delivering the tie-breaking RBI single Sunday afternoon as the New York Mets salvaged the finale of a three-game series by edging the Boston Red Sox 5-4 at Citi Field.
The Mets (72-58) snapped a five-game home losing streak while the Red Sox (60-70) fell to 10-6 under interim manager Torey Lovullo.
The Mets carried a 4-2 lead into the seventh, when Red Sox catcher Blake Swihart singled with one out, took second on a wild pitch by right-hander Noah Syndergaard and went to third on a fly out by left fielder Alejandro De Aza.
Pinch-hitter Jackie Bradley chased Syndergaard with an RBI double and stole third against right-hander Hansel Robles. Center fielder Mookie Betts then hit a blooper into shallow left, where Cuddyer got a late start on the ball.
With Cuddyer, third baseman David Wright and shortstop Ruben Tejada all converging, the ball landed just fair. Betts raced around second and ended up at third, which wasn’t covered.
Right-hander Tyler Clippard (2-0) struck out third baseman Pablo Sandoval to preserve the tie. With one out in the bottom of the seventh, Wright walked against left-hander Robbie Ross (0-2). Murphy beat out a potential double play ball, stole second and scored easily when Cuddyer singled sharply to left for his third hit in as many at-bats.
Clippard threw a perfect eighth before right-hander Jeurys Familia earned his 35th save despite allowing two hits in the ninth. He struck out Betts with runners at the corners for the final out.
Cuddyer reached base in all four plate appearances and scored twice. Syndergaard laced an RBI single in the second. Second baseman Juan Uribe had a go-ahead two-run double in the sixth, when catcher Anthony Recker added an RBI single two batters later.
First baseman David Ortiz gave the Red Sox a 2-1 lead with a two-run homer in the sixth. It was the 494th homer of his career, breaking a tie with Lou Gehrig and Fred McGriff for 27th place all-time.
Syndergaard allowed four runs on six hits and one walk while striking out three over 6 2/3 innings. Red Sox left-hander Wade Miley allowed four runs on nine this and one walk while striking out six over six innings. 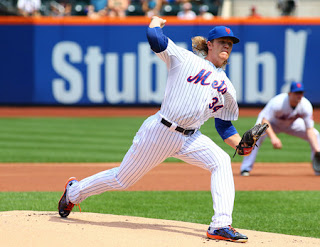 Paypal offer to rise 40 percent from post spin off lows