Share
Facebook Twitter LinkedIn StumbleUpon Tumblr Pinterest Reddit WhatsApp Telegram Share via Email Print
Share
The “glaring failures” of some European countries to take in refugees are turning the Mediterranean into a mass grave and creating gruesome scenes at borders, the head of the European Parliament has said.
Martin Schulz, a German Social Democrat, said those European governments that have resisted European Union proposals to agree a common plan must do more to deal with the crisis, which is intensifying due to a surge in migrants fleeing war and poverty.
The International Organization for Migration estimates a third of a million people have crossed the Mediterranean so far this year to wash up in southern Europe.
“We are not dealing with a failure of the EU, but rather with a glaring failure of some governments, who don’t want to take responsibility and thereby impede a joint European solution,” Schulz told Germany’s Die Welt newspaper.
Germany expects to receive a record 800,000 refugees and asylum-seekers this year.
“The governments of some member states must finally remove their blockade and end this unworthy game,” Schulz said.
He did not single out any states. However, Hungary, which is part of Europe’s passport-free Schengen zone, is building a fence along its border with Serbia to contain what it calls a threat to European security, prosperity and identity.
Britain has a long-standing exemption from EU rules on border issues, along with Ireland and Denmark. Eastern European states have pleaded immigrants would simply not fit in.
The difficulty of agreeing a common policy was manifest in June when leaders angrily rejected European Commission chief Jean-Claude Juncker’s proposal that they accept binding quotas to share out asylum-seekers from Italy and Greece.
“The current refugee crisis shows what happens when there is less Europe,” Schulz said.
“The Mediterranean becomes a mass grave, gruesome scenes play out at borders, there is mutual blame – and those in greatest need, seeking our protection, are left without help.”
Austria said on Friday 71 refugees, including a baby girl, were found dead in an abandoned freezer truck, while Libya recovered the bodies of 105 migrants washed ashore after their overcrowded boat sank on its way to Europe.
Schulz said some EU countries, “who don’t care about European integration”, had prevented agreement on a Europe-wide plan to tackle the refugee crisis.
“That is more than cynical, when one looks at the plight of the refugees.” 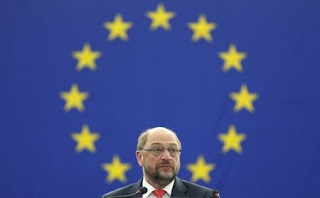 Syngenta may seek partners after reviwe