Share
Facebook Twitter LinkedIn StumbleUpon Tumblr Pinterest Reddit WhatsApp Telegram Share via Email Print
Share
A television reporter and a cameraman were shot and killed during a live broadcast in Virginia on Wednesday in an attack authorities said was carried out by a former employee of the TV station.
The suspect, 41-year-old Vester Flanagan, shot himself several hours later as police pursued him on a Virginia highway. He died later at the hospital, police said.
Social media postings by a person who appeared to be Flanagan indicated the suspect had grievances against the station, CBS affiliate WDBJ7 in Roanoke, Virginia, which let him go two years ago. The person also posted video that appeared to show the attack filmed from the shooter’s vantage point.
Flanagan was apparently “disturbed in some way” over something that had happened in his life, said Franklin County Sheriff Bill Overton.
The WDBJ7 journalists who were killed were reporter Alison Parker, 24, and cameraman Adam Ward, 27. The woman being interviewed on the morning news program was wounded.
The on-air shooting occurred at about 6:45 a.m. EDT (1045 GMT) at Bridgewater Plaza, a Smith Mountain Lake recreation site about 200 miles (320 km) southwest of Washington, D.C.
The broadcast was abruptly interrupted by the sound of gunshots as Parker and the woman being interviewed, Vicki Gardner, executive director of the Smith Mountain Lake Regional Chamber of Commerce, screamed and ducked for cover.
Hours after the shooting, someone claiming to have filmed it posted video online. The videos were posted to a Twitter account and on Facebook by a man identifying himself as Bryce Williams, which was Flanagan’s on-air name.
The videos were removed shortly afterward. One video clearly showed a handgun as the person filming approached the woman reporter.
The person purporting to be Williams also posted, “I filmed the shooting see Facebook” as well as saying one of the victims had “made racist comments.” Flanagan was black and the victims in Wednesday’s shooting were white.
Flanagan shot himself as Virginia State Police were closing in on a rental car on Interstate 66 in Fauquier County, WDBJ7 said. Virginia state police said the suspect refused to stop when spotted by troopers and sped away.
Minutes later, the suspect’s vehicle ran off the road and crashed, police said in a statement, adding the troopers approached the vehicle and found the driver with a gunshot wound. He was taken to Inova Fairfax Hospital near Washington, D.C., where he died.
“It’s obvious that this gentlemen was disturbed in some way at the way things had transpired at some part of his life,” Overton told a news conference, asked about the suspect’s motive.
“It appears things were spiraling out of control, but we’re still looking into that,” he said. “We still have a lengthy investigation to conduct and that’s our focus as we move forward.”
PAST DISCRIMINATION LAWSUIT
Flanagan had sued another station where he worked in Florida, alleging he had been discriminated against because he was black.
Flanagan said he was called a “monkey” by a producer in a lawsuit filed in federal court against a Tallahassee station, WTWC, in 2000. He also said a supervisor at the station called black people lazy. The Florida case was settled and dismissed the next year, court records show.
ABC News reported on its website it received a 23-page fax from someone saying he was Bryce Williams some time between Tuesday night and Wednesday morning. The network turned the fax over to authorities, it said, without giving details on its contents.
WDBJ7 President and General Manager Jeff Marks said he could not figure out a particular connection between Flanagan and the two dead journalists.
Speaking to CNN about Flanagan, he added, “Do you imagine that everyone who leaves your company under difficult circumstances is going to take aim?”
“Why were they (Parker and Ward) the targets, and not I or somebody else in management?” he said.
The station’s early-morning broadcast showed Parker interviewing Gardner about the lake and tourism development in the area. Gunshots erupted, and as Ward fell his camera hit the ground but kept running. An image caught on camera showed what appeared to be a man in dark clothing facing the camera with a weapon in his right hand.
Gardner was in stable condition at Carilion Roanoke Memorial Hospital, said Carilion spokesman Chris Turnbull.
The station described the two dead journalists as an ambitious reporter-and-cameraman team who often produced light and breezy feature stories for the morning program.
“I cannot tell you how much they were loved,” Marks said.
They were both engaged to be married to other people at the station.
A couple living across from the shopping center where the shooting took place said police burst into their apartment and awakened them at gunpoint. Police said they were looking for the shooter, according to the woman, who identified herself only as Annie.
“I moved from Philly (Philadelphia) to get away from that kind of stuff,” she said, adding that she had been in the area a few months.
The White House said the shooting was another example of gun violence that is “becoming all too common.”
White House spokesman Josh Earnest, reflecting frustration that President Barack Obama has expressed over his inability to push through laws to tighten gun laws, told reporters that Congress could pass legislation that would have a “tangible impact on reducing gun violence in this country.”
Virginia Governor Terry McAuliffe said, “Keeping guns out of the hands of people who would use them to harm our family, friends and loved ones is not a political issue; it is a matter of ensuring that more people can come home safely at the end of the day.”
According to his social media sites, Flanagan attended San Francisco State University. A university spokesman said he graduated in 1995 with a degree in radio and television. 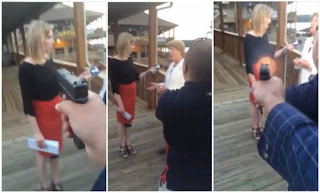 Dollar gains for a second day as stocks recover