Share
Facebook Twitter LinkedIn StumbleUpon Tumblr Pinterest Reddit WhatsApp Telegram Share via Email Print
Share
Chinedu Eze  Nigeria’s major carrier, Arik Air, has confirmed that a member of its cabin crew was on Monday night arrested at Heathrow Airport, London by the UK Border Force in connection with alleged possession of items suspected to be banned substances.
The airline, which did not give the name of its crew member, said it was presently carrying out its own investigation to determine how the cabin crew member came about the suspected banned substance.
“Arik Air will also be cooperating fully with the UK authorities and other appropriate agencies in their investigations. The airline again reaffirms its commitment to the fight against drug and illicit substance trafficking and will not tolerate the use of any of its aircraft or crew for the courier of banned items and substances,” the spokesman of the airline, Adebanji Ola, said in a statement.
Ola said Arik Air carries out very stringent checks on all members of staff and its passengers ahead of all flights and that the airline would continue to focus its attention on measures to prevent future incidents.
“Arik Air is a responsible Nigerian company always seeking to maintain and uphold the integrity and proud reputation of the nation,” Ola also said.
Until recently when security authorities stepped up measures to screen pilots and cabin crew, they were seen as easy conduits for the trafficking of drugs and other illicit substances. 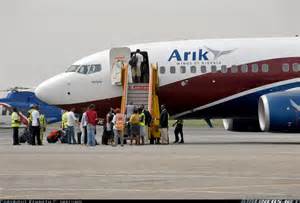 Local channels blacked out on Dish across 36 states