Share
Facebook Twitter LinkedIn StumbleUpon Tumblr Pinterest Reddit WhatsApp Telegram Share via Email Print
Share
A draft of the lyrics for Bob Dylan’s protest song “A Hard Rain’s A-Gonna Fall” is going up for auction in London next month and is expected to fetch up to 200,000 pounds ($314,000 dollars), Sotheby’s auction house said on Tuesday.
The type-written manuscript, with the date 1962, contains many scribbled revisions and scratchings-out to the song that Dylan released as a single in December 1962.
Among the most notable changes is the final chorus, where the draft version has the line “It’s a hard rain must fall.” When the song was recorded, it was changed to “It’s a hard rain’s a-gonna fall” to conform with the preceding choruses.
The song, like many of those recorded by Dylan in the 1960s, has been much discussed as to its inspiration. Dylan has both suggested and denied that it was written in response to the Cuban Missile Crisis, although he performed the song at Carnegie Hall in New York City in September 1962, a few weeks before the crisis erupted.
Sotheby’s said the manuscript is being sold by the family of Elizabeth D’Jazian, ex-wife of American entertainer and peace activist Hugh “Wavy Gravy” Romney. It was in Wavy Gravy’s room above the Gaslight Folk Club in New York’s Greenwich Village that the 21 year-old Dylan typed the lyrics.
The manuscript will be auctioned in London on Sep. 29.
A 2014 auction of Dylan’s 1965 original hand-written lyrics for “Like a Rolling Stone” fetched just over $2 million at Sotheby’s in New York, setting a record for a rock music manuscript. 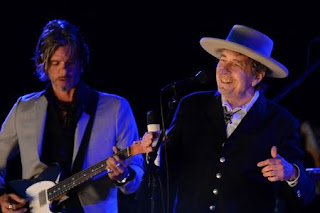