Share
Facebook Twitter LinkedIn StumbleUpon Tumblr Pinterest Reddit WhatsApp Telegram Share via Email Print
Share
Britain must remain cautious in its relations with Iran, foreign minister Philip Hammond said on Monday, after he reopened the British embassy in Tehran nearly four years after it was stormed by protesters.
While the historic step marks an easing of tense relations between the Islamic Republic and Western powers, Hammond said there was still disagreement on major issues.
“We should tread carefully. There’s a deep legacy of distrust on both sides and we have major areas where we have very substantial policy differences,” he told the BBC shortly before a scheduled meeting with Iranian President Hassan Rouhani.
He said that while both countries agreed on the need to tackle jihadist group Islamic State, there were disagreements on human rights issues.
Hammond said the current Iranian government had displayed a more nuanced approach than its predecessor to a long-running conflict with Israel, adding that Tehran would be judged on its actions, not its words.
“What we’re looking for is behavior from Iran, not only towards Israel but towards other players in the region, that slowly rebuilds their sense that Iran is not a threat to them,” he said. 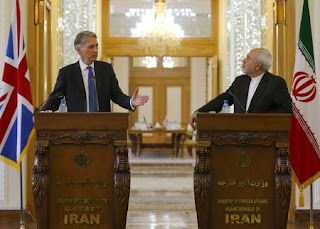