Share
Facebook Twitter LinkedIn StumbleUpon Tumblr Pinterest Reddit WhatsApp Telegram Share via Email Print
Share
The sweeping archives of award-winning novelist Kazuo Ishiguro will be heading to a University of Texas research library, including a discarded opening chapter for his best-known book, “The Remains of the Day,” the university said.
The novelist, who was born in Nagasaki, Japan, in 1954 and has lived in Britain since he was a child, has kept extensive notes of his novels and multiple drafts of his works that include “Never Let Me Go” and “The Buried Giant.”
The collection will be going to the Harry Ransom Center at the University of Texas, a research library that is a major collector of manuscripts and original source material. The university paid just over $1 million to acquire the material, a library spokeswoman said.
“For many years, I’ve been in the habit of keeping a large cardboard box under my desk into which I throw, more or less indiscriminately, all papers produced during my writing that I don’t want to file neatly and take into the next stage of composition,” Ishiguro said in a statement released by the university.
These include early drafts of chapters, rejected pages, scraps of paper with scribbled thoughts and repeated attempts at the same paragraph, he added.
Also in the collection will be unpublished works and notes for stories, screenplays and songs, including a track called “Shingles” written by a young Ishiguro who had tried to land a contract with a major record label.
In preparing to ship his archives to Austin, Ishiguro found a manuscript for a pulp Western, his first serious attempt at fiction that he thought had been lost.
There is also a short novel that soon followed, called “To Remember a Summer By.” At least one publisher rejected it.
Ishiguro began to gain notice in the 1980s for his works such as “A Pale View of the Hills” and global fame for “The Remains of the Day,” a story of a fastidious and repressed butler in postwar Britain.
The novel won him the prestigious Man Booker Prize for fiction and was turned into a well-received movie starring Anthony Hopkins and Emma Thompson.
In the 1990s, a friend told Ishiguro to keep an archive of his notes.
“This struck me as extreme, but from then on, instead of giving the contents of the cardboard box to the refuse collectors, I began emptying them in plastic crates and storing them in the attic,” he said. 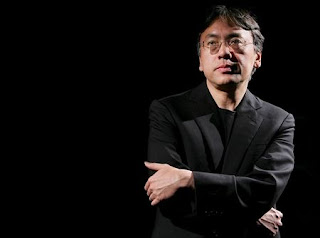