Share
Facebook Twitter LinkedIn StumbleUpon Tumblr Pinterest Reddit WhatsApp Telegram Share via Email Print
Share
An Estonian police officer who says Russia abducted him in a cross-border raid was sentenced to 15 years in prison on Wednesday, stoking tensions between Moscow and the former Soviet republic.
Eston Kohver’s prison term will put further strain on relations that have deteriorated since Russia annexed Crimea from Ukraine last year, reviving bitter memories of Soviet rule.
Russia arrested Kohver on espionage charges last September, saying he was caught on Russian territory. Tallinn maintains he was taken at gunpoint at a border crossing.
About a quarter of Estonia’s population are ethnic Russians and Moscow’s actions in east Ukraine, where the West accuses it of sending troops to support separatist rebels, have rattled nerves in the NATO member state. Moscow has repeatedly denied these allegations.
“I strongly condemn (the) verdict on Eston Kohver; his illegal detention constitutes a grave violation of international law by the Russian Federation,” Estonian Prime Minister Taavi Roivas said on Twitter.
Two people convicted of spying for Russia are currently jailed in Estonia.
Kohver will serve his sentence in a Russian hard labor camp and be fined 100,000 rubles ($1,525), Interfax news agency quoted his lawyer as saying outside the Pskov regional court, where Estonian and European Union diplomats gathered to protest against the conviction.
Russia’s Federal Security Service (FSB), successor to the Soviet KGB, said Kohver was detained carrying a Taurus handgun with ammunition, 5,000 euros ($5,500) in cash, special equipment for concealed audio recording and documents that “bear evidence of an intelligence mission”.
Tallinn said he was taken trying to stop illegal activity on the border when unidentified abductors jammed radio communications and used smoke grenades.
SPY SWAP
Since Kohver’s capture, Estonia has ramped up defenses along its 290-km (180-mile) border with Russia, allocating more than 2 million euros for clearing and buying land and setting up a special border task force.
Some commentators have suggested the police officer was taken to be exchanged for Russian spies currently being held in Estonia.
In 2009, Estonian Defense Ministry official Herman Simm was jailed for 12 years for passing 2,000 pages of information to Russian intelligence services.
Marko Mihkelson, the chairman of Estonia’s National Defense Committee, said Kohver might not have to serve his entire 15-year sentence and a prisoner swap was possible.
“I am confident Kohver will be freed earlier than we can currently conceive,” he told state broadcaster ERR.
The European Union said Kohver’s detention in Russia was illegal and called for his immediate release.
“Mr. Kohver has been deprived of the right to a fair trial: there was no public hearing of the case,” EU foreign affairs chief Federica Mogherini said in a statement.
In Washington, State Department spokesman John Kirby condemned Russia’s actions, saying it showed disregard for the rule of law.
“His abduction, his detention and now conviction on baseless charges demonstrated a flagrant disregard by Russian authorities for the rule of law and raises serious concerns regarding Russia’s compliance with its international legal obligations,” Kirby told a daily briefing.
He said the United States was also troubled by reports that Kohver did not receive proper legal representation from his attorney who was appointed by Russian authorities.
“Neither the public nor Estonian counsel were permitted to be present during the judicial proceedings,” Kirby added.
Estonian Foreign Minister Marina Kaljurand said Tallinn would work with its Western allies to win freedom for Kohver, a father of four. “We intend to keep up international pressure until Eston Kohver is released and has returned home to his family,” she said. 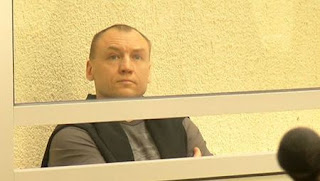