Share
Facebook Twitter LinkedIn StumbleUpon Tumblr Pinterest Reddit WhatsApp Telegram Share via Email Print
Share
The first recording contract ever signed by The Beatles – during their early days in Hamburg, Germany – is expected to fetch about $150,000 when it goes up for auction in New York next month, the company handing the sale said on Tuesday.
The contract, written in German and signed in 1961 by Paul McCartney, John Lennon, George Harrison and then-drummer Peter Best, is part of a 300 lot collection of Beatles memorabilia assembled by the late German record producer Uwe Blaschke.
Dean Harmeyer, consignment director at Heritage Auctions, called the contract “perhaps the most historically important Beatles document to ever appear at auction.”
The Blaschke collection includes photos, documents and autographs related to the time the band from Liverpool, England spent in Germany in the early 1960s before going on to conquer the world.
The 1961 contract was for a record that didn’t even bear the name of The Beatles. It was for an uptempo version of the traditional German children’s song “My Bonnie” and was credited to Tony Sheridan & The Beat Brothers because the record company felt the name “Beatles” was unsuitable for the German market, according to the auction house.
“Without this contract, which directly led to their involvement with (manager) Brian Epstein, the Beatles may have never been able achieve their later success as a recording group. And at the time it was a momentous career milestone – they’d finally secured an actual recording deal, something they had only dreamed of before ‘My Bonnie’,” Harmeyer said in a statement.
Other items for sale include an autographed copy of the group’s first hit single “Love Me Do,” which is expected to fetch $10,000, and a snapshot of 17-year-old Harrison modeling his first leather jacket, taken in 1960 in Hamburg, with an estimated sale price of $3,000.
Beatles memorabilia is in high demand by collectors.
A guitar played by George Harrison in 1963 sold for $485,000 in New York in May and a collection of John Lennon manuscripts and drawings for two books he wrote in the mid-1960s sold for $2.9 million at a Sotheby’s auction in 2014.
The Beatles split up in 1970. Lennon was shot dead in New York in 1980 and Harrison died of cancer in 2001.
The Heritage Auctions event will be held in New York on Sept. 19 after a traveling exhibition of some items to Beverly Hills and Dallas. 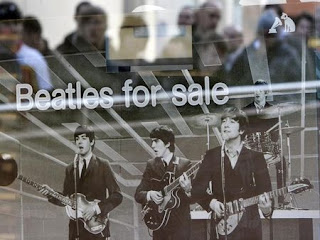