Share
Facebook Twitter LinkedIn StumbleUpon Tumblr Pinterest Reddit WhatsApp Telegram Share via Email Print
Share
Lebanon’s health minister has warned that the country is facing a major health disaster because of the failure to collect huge amounts of rubbish.
Piles of rubbish have been mounting across Beirut for the last month following the closing down of the capital’s main landfill site.
Arguments have since raged over the best way to tackle the problem.
The crisis has now become so acute that some residents have resorted to burning rubbish on the streets.
That in turn has resulted in toxic fumes enveloping parts of Beirut.
Health Minister Wael Abu Faour warned that Lebanon will suffer a “major health catastrophe” if the cabinet does not act immediately to address the problem. He was quoted in the as saying in the Lebanon Daily Star that “drastic measures” needed to be taken.
The minister said that Lebanon’s environment – including water, sea and air – was threatened with contamination. He called for emergency measures to be speedily implemented.
Correspondents say that political wrangling in recent weeks has prevented the government from finding a consensus over the problem.
Residents of Beirut have had to contend with the stench of 20,000 tonnes of rubbish on the streets during the hottest time of the year.
Some have worn masks in an attempt to protect themselves from the foul smell, and thousands have vented their anger on social media. 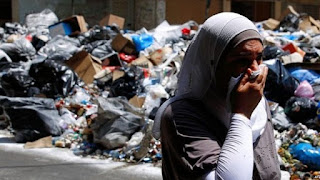 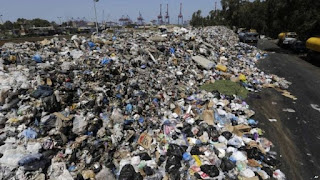