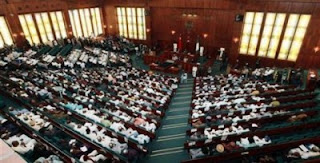 The nation may have spent about N12, 967, 600,000 in two months to maintain National Assembly members, who were inaugurated on June 9, it has been learnt.
The 109 senators got N36.4 million each; the 360 members of the House of Representatives received N25 million each.
The Senators and the representatives were first paid N10milion each  in June to ‘cushion’ the difficulty of settling down in Abuja.
The amount, which was to cover their expenses   on housing, transport and furniture, cost the public about N4.6billion.
Last month under a pro-rata arrangement for quarterly allowance covering June, Senators got N13. 4 million each and representatives, N7million each.
Since their inauguration, the legislators have gone on recess three times. Before going on break last Thursday, Senators got N13 million each and representatives, N8 million. They have yet to pass a bill since they began sitting in June.
Their inauguration was followed by the controversial emergence of Senators Bukola Saraki and Ike Ekweremadu as Senate President and Deputy President.
Yakubu Dogara and Lasun Yusuf were also picked as House Speaker and Deputy Speaker against the wish of their party, the All Progressives Congress (APC).
Last Wednesday, senators disagreed on the recommendation by the Finance Committee  to cut their salary and allowances.
The James Manager-led committee had recommended a 30 percent cut which, if accepted,would have saved tax payers about N2billion  yearly .
This translates to  N2 million reduction from the N51 million quarterly allowances enjoyed under the 7th Senate or about N874 million saved  from each year’s four quarterly allowances alone.
Besides, the representatives’ reduction of their quarterly allowances from N39million to N33 million will save the nation about N2. 1 billion, made up of N6million reduction in each member’s allowances over four quarters.
Some Nigerians  have criticised the Senators for rejecting the pay cut proposal even after President Muhammadu Buhari and Vice President Yemi Osinbajo have resolved to slash their salary by 50 per cent.
YEAR    2011 – 2014
SENATE  N51millio
HOUSE OF REPS   N39million
YEAR   2015
SENATE    N49million
HOUSE OF REPS N33million
After a two-hour closed door meeting on Wednesday, Senate President  Bukola   Saraki  announced that the Manager committee’s report aimed  at  reducing  salary and allowances, would be stood down. The report, he added, would debated on later date.
Following public criticism over the yearly N150billion budget being enjoyed by the National Assembly over the past few years, members  decided to reduce their 2015 budget by N30 billion, to N120billion.
EFCC
The Nation learnt that many Senators and representatives have signed documents that could make them vulnerable to inquiry by the Economic and Financial Crimes Commission (EFCC) and other anti-corruption bodies.
According to sources, just like their predecessors, the lawmakers had circulated a template used to ‘account’ for their multi-million Naira allowances.
The template only requires the gathering of receipts to render an account of expenditure and it is basically given as follows:
(See Attached)
(See Attached)
Transparency: citizens have  right to know,CICLAC claims
The  Civil Society Legislative Advocacy Centre (CISLAC) hold the view that Nigerians have a right to know how legislators are spending tax payers’ money.
Speaking with The Nation, CISLAC’s Executive Director, Mr. Auwal Ibrahim Musa asserted that his organisation and other civil society organisations had long been urging the National Assembly to bring in more transparency into its affairs.
His words: “At CISLAC, we have done some work on the cost of governance and the need for members of the National Assembly to have a more responsive budget, based on the reality of the economy.
“We also want the National Assembly to open up on its budget so that Nigerians will appreciate what they are really doing because a lot of people do not understand why the National Assembly should be having such kinds of monies while the National Assembly members are not helping matters by clarifying things or enlightening citizens.
“Rather, they sometimes get angry over calls for more transparency in their accounts and this is not the best way to communicate with the public. These are public funds!
“Instead of them to exercise patience and act with understanding so that Nigerians can appreciate the representation they give, they sometimes get angry and try to dismiss people as if it is their personal money.
“I think there is poor communication from the National Assembly and this is not helping them and it is not helping the nation. They need to explain because they are in charge of the nation’s appropriations. If they want others to be transparent and also subject their own budget to National Assembly’s oversight, they must be able to account for what they are doing.
“As it is now, unfortunately the National Assembly is not accountable to anybody; it is supposed to be accountable to the electorate but it is not accountable to anybody. Many of them do not even go their constituencies for constituents to ask questions. Yet sometimes, when people speculate, they just get angry.
“If you don’t want people to speculate, you need to create a platform where you can share information on what you are doing. Your going into public office is not a private thing, especially when public funds are involved.”