Share
Facebook Twitter LinkedIn StumbleUpon Tumblr Pinterest Reddit WhatsApp Telegram Share via Email Print
Share
Hundreds of students of Federal College of Agriculture and Federal College of Animal Health, Ibadan for the second day yesterday, stormed major streets and roads at Moore Plantation/ Odo-Ona area in the Oyo State capital.
They were protesting severe injuries inflicted on their colleague, who was knocked down by a motorist.
The  student was injured in the road mishap, which occurred at about 4p.m on Wednesday.
The protest, which entered its second day yesterday, saw many residents and motorists fleeing the area for fear of being attack.
But some motorists became victims of the students’ wrath as their vehicles’ windscreens were damaged.
The students set burn fires on the busy Ibadan-Abeokuta Expressway, after blocking the road with heavy objects, leading to gridlock for more than one hour.
The accident victim, Aminu Bola, who is a 200-Level National Diploma (ND) student of Agric Technology of the Federal College of Agriculture, is receiving treatment at the Intensive Care Unit of Molly Hospital, Ibadan.
Anti-riot policemen were deployed to different locations where the protest took place.
A few police vans accompanied the students as they carried out their actions through the city.
It was gathered that the students were angered yesterday’s morning, when they learnt that a middle-aged man was also injured by another vehicle on Wednesday’s night at the same spot, “where the student was knocked down”.
The identity of the second accident victim was not known as at yesterday. But some residents claimed that he died before getting to the hospital.
The students, who displayed placards with various inscriptions, berated government for alleged neglect and lack of concern for the welfare of the citizens.
They wondered how long it would take to provide the needed facilities and “bumps to prevent incessant accidents on roads”.
The protesting students made a procession through Moore Plantation, Odo-Ona, Iyaganku, Dugbe, Mokola and Government Secretariat Complex in Agodi, where they sought for the audience with Governor Abiola Ajimobi.
But he was not available to receive the protesting students.
The students’ leaders said the victim needed N3 million for urgent surgical operation to save his life at the hospital.
Their spokesman, Raji Muritala, who threatened that the students would be forced to block the expressway, if nothing is done to save Aminu’s life,  said:  “We need N3 million for urgent surgical operation. We need the assistance of the government”. 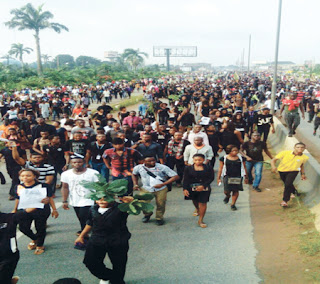