Share
Facebook Twitter LinkedIn StumbleUpon Tumblr Pinterest Reddit WhatsApp Telegram Share via Email Print
Share
Senate President Bukola Saraki’s attempt to review the salaries and allowances of senators and simultaneously make the details of their remuneration public may prove to be a herculean task, as the move has not gone down well with some of his colleagues.
Whereas the report of the ad hoc Committee on Finances of the Senate set up to review their salaries and allowances, which was laid before the Senate last Thursday by Senator James Manager who chaired the committee, was slated for debate in the order paper yesterday, it was eventually stood down after a two-hour closed-door session by the senators.After the meeting, Saraki announced that the report of the committee, which was said to have recommended pay cuts and transparency on their earnings would be stood down for further input.
“The Senate in the closed-door session deliberated on the report of the Committee on Finances of the Senate and agreed to step it down for further legislative input,” Saraki said.However, THISDAY learnt yesterday that most of the senators rejected the move to reduce their earnings. They also criticised the attempt to make their earnings public.
One of the senators, who did not want to be named, told THISDAY that the attempt to further reduce their earnings was not “sensible” since the National Assembly’s annual budget had already been reduced from N150 billion to N120 billion.According to him, the cut in their budget by N30 billion automatically translates to a reduction in their overall remuneration, adding that reducing their earnings further would make it difficult for them to meet the various demands from their constituents.
He also said the Senate could not unilaterally reduce its earnings without reaching a consensus with the House of Representatives, as well as the various departments of the National Assembly such as the Public Conduct Commission, National Assembly Commission and the National Institute for Legislative Studies, among others.
“Our budget was N150 billion. It has already been reduced to N120 billion. That will affect our income. I have constituency offices to maintain. How do l cope with the demands of my constituents?“If you see my phone here, you will see many requests for money. How do l meet all these? Should l go and steal? I have security men; I pay N150,000 to the police every month. How do l do this?” he demanded to know.
THISDAY learnt that it was some senators’ vehement rejection of the recommendations of the committee on the review of the finances of the Senate that led to the conclusion that the matter was beyond the Senate. In this regard, suggestions were made that the Senate must consult with the House and other departments of the National Assembly before it could take a decision on the report of the committee.
Briefing journalists after the plenary, Senator Dino Melaye (Kogi West), Chairman of the ad hoc Committee on Media, said since the Senate’s budget was not independently prepared, the Senate had resolved to consult all stakeholders before drawing a conclusion on the report.
“The Senate today, in a closed- door session, discussed the report of the ad hoc Committee on Finances of the Senate and after due deliberation by the senators, we came to the conclusion that since the budget of the Senate is not independent of the budget of the National Assembly, where the budget of the House of Representatives is also inclusive.
“We also have the management, we have the National Institute for Legislative Studies, we have even the Public Conduct Commission and the National Assembly Civil Service Commission included in the budget.“So we have agreed that we should consult among other arms that share the budget of the National Assembly alongside the House of Representatives before we can draw a conclusion on the report.“So the resolution is that we are going to interface with the House of Representatives so that we can be on the same page on the report as presented. This is the resolution of the Senate today (yesterday) in the closed-door session,” he said.
Melaye, however, added that his colleagues were prepared to make sacrifices for the nation’s development by agreeing to reduce their earnings, saying the National had already taken this step with the reduction of its annual budget from N150 billion to N120 billion.“The Senate, I repeat, deliberated on the report. The Senate is ready to make sacrifices for the purpose of developmental purposes and that was already indicated even in the Appropriation Act of 2015.“For the past five years, the budget of the National Assembly had always been N150 billion. But the 2015 budget of the National Assembly is N120 billion.
“Already, there has been a reduction of N30 billion in the budget of the National Assembly. And this N120 billion is to be shared among the six or seven organs of the National Assembly – the National Assembly Service Commission, the Senate, the House of Representatives, the National Institute for Legislative Studies and the Public Conduct Commission (PCC), among other arms of the National Assembly, including the salaries and allowances of the legislative aides, numbering over 3,000; they are all inclusive,” he elaborated. 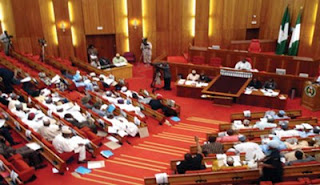