Share
Facebook Twitter LinkedIn StumbleUpon Tumblr Pinterest Reddit WhatsApp Telegram Share via Email Print
Share
The National Emergency Management Agency (NEMA) on Thursday said three more bodies have been recovered from the site of Wednesday’s helicopter crash in Lagos.
Four persons had earlier been confirmed dead in the accident that occurred at about 3:10pm in Oworonshoki area of the state.
The chopper, marked 5N – BDG – 760540, was coming from an oil rig in the Niger Delta when it plunged into the lagoon. 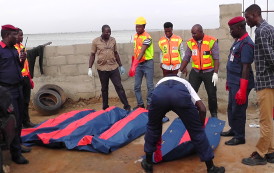