Share
Facebook Twitter LinkedIn StumbleUpon Tumblr Pinterest Reddit WhatsApp Telegram Share via Email Print
Share
A planned visit to Turkey by Iranian Foreign Minister Javad Zarif, during which he had been expected to discuss the Syrian conflict, has been postponed, a Turkish Foreign Ministry official said on Tuesday.
The official gave no further details.
Turkey and Iran back opposing sides in the wars in Syria and Yemen, but their economic interdependence has kept relations broadly on track.
Turkey has stepped up its involvement in Syria’s civil war in recent weeks, calling for a protected zone that could relieve pressure on rebels fighting against forces loyal to President Bashar al-Assad, a close ally of Iran.
Iran’s ISNA news agency quoted an Iranian Foreign Ministry official as saying the trip would go ahead at a later date.
“This visit is on the agenda but will take place at a later date because the schedules didn’t line up in this time frame,” the official said.
Zarif was expected in Beirut later on Tuesday. He is also expected to visit Moscow next week, Tass news agency quoted the Iranian embassy as saying on Monday. 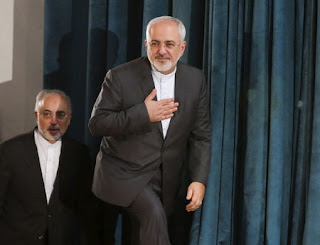