Share
Facebook Twitter LinkedIn StumbleUpon Tumblr Pinterest Reddit WhatsApp Telegram Share via Email Print
Share
Firefighters battling a major wildfire in northwestern Arizona on Monday reported progress in containing the blaze that has forced people out of about 1,000 homes and charred nearly 6,800 acres.
Officials said an estimated 300 firefighters took to the ground and the air early on Monday expecting to announce some degree of containment for the Willow fire in the Mohave Valley, about 30 miles southeast of Bullhead City, Arizona.
“We’re definitely encouraged by what we’re seeing right now,” said Dolores Garcia, a Bureau of Land Management spokeswoman. “We’re just waiting to see if the lines we have on the ground will hold.”
The fire was one of dozens burning across the drought-parched U.S. West on Monday, many of them started by lightning strikes. In California, a firefighter died fighting a lightning-sparked blaze in the Sierra Nevada mountains near Lake Tahoe on Saturday.
Strong winds were expected to increase the risk of fire in Northern California for several days beginning Monday, the California Department of Forestry and Fire Protection said. Last week, the agency responded to nearly 250 new wildfires, spokesman Kendal E. Bortisser said.
The fast-moving Willow fire started on Saturday and, aided by strong winds, has roared through salt cedar, mesquite, willow, grass and brush, forcing the evacuation of six housing subdivisions and other residences.
Fire officials said evacuation orders were lifted for all but about 75 dwellings on Monday.
An American Red Cross shelter has been set up at a local elementary school for affected residents.
The fire was sparked by lightning on Bureau of Indian Affairs land near the Havasu National Wildlife Refuge, said Robyn Broyles, a spokeswoman for the National Interagency Fire Center in Boise, Idaho.
Active blazes have also been reported in Washington and Oregon.
In Washington, the Wolverine fire has burned 28,725 acres in the northern Cascade mountains and is 20 percent contained. A camping area and 360 people have been evacuated from the year-round Lutheran retreat of Holden Village, Interagency Coordination Center spokeswoman Carol Connolly said.
In southern Oregon, firefighters have made significant progress on the Stouts Creek Fire. The 23,000-acre blaze is about 40 percent contained, the Oregon Department of Forestry said. 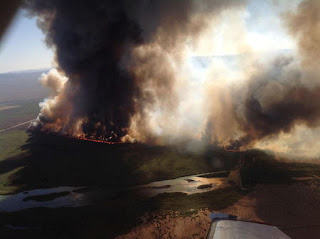