Share
Facebook Twitter LinkedIn StumbleUpon Tumblr Pinterest Reddit WhatsApp Telegram Share via Email Print
Share
Germany’s trade surplus is expected to rise to a new record in 2015 thanks to falls in the prices of imported oil and gas, Der Spiegel reported on Saturday.
The Finance Ministry is estimating a trade surplus of 8.1 percent of economic output after 7.6 percent last year, the magazine said, citing an internal ministry document.
The lower cost of imports of oil and gas is expected to boost the trade balance by around 1.2 percent alone, the document said. Without the decline in oil and gas prices, the trade surplus would have fallen compared with the previous year.
Germany has come under international pressure to reduce its trade surplus, which critics say contributes to imbalances in the world economy.
In a report published last month, the International Monetary Fund said Berlin should focus on bolstering medium–term growth and reducing external imbalances.
The European Commission considers trade surpluses that are repeatedly over 6 percent of economic output as dangerous for stability and has urged Germany to undertake more investment to stimulate imports.
Despite a fall in exports in June, the larger net balance between exports and imports meant that the trade surplus widened to a record 24.0 billion euros ($26.19 billion), data published on Friday showed. 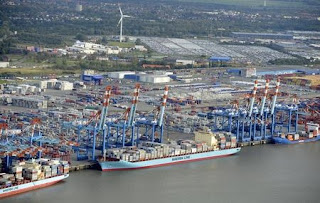 Hurry now and get 20% bonus on bet9ja register to enjoy this offer.