Share
Facebook Twitter LinkedIn StumbleUpon Tumblr Pinterest Reddit WhatsApp Telegram Share via Email Print
Share
Egypt’s ousted former president Mohamed Mursi, who has been in detention for two years, is to undergo a medical examination at his request after he complained about prison food, state media said on Saturday.
Mursi, who has diabetes, described the meals served to him as “very bad”, and has refrained from eating prison food “because he senses it is not safe for him,” state news agency MENA reported.
According to MENA, Mursi said that prison officials had denied his requests to receive food from outside the prison.
Prison officials could not be reached for comment.
Mursi currently faces charges of giving state secrets to Qatar while president. The judge overseeing the case adjourned the hearing until Sunday and ordered that he be seen by two doctors, MENA said.
Mursi, a senior member of the now-banned Muslim Brotherhood, was elected president in Egypt’s first competitive elections in 2012. He was removed from power by the army in mid-2013 following mass protests against his rule.
Authorities have since pursued a crackdown on Islamists that has seen hundreds killed and thousands detained.
Mursi was sentenced to death earlier this year over a mass jail break during the 2011 uprising. 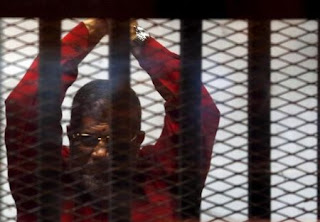