Share
Facebook Twitter LinkedIn StumbleUpon Tumblr Pinterest Reddit WhatsApp Telegram Share via Email Print
Share
The newly appointed Executive Vice Chairman and CEO of the Nigerian Communications Commission (NCC), Professor Umaru Danbatta, has resumed duty in acting capacity, pending confirmation by the Senate.However, the former boss of the NCC, Dr. Eugene Juwah was surprisingly absent during the handover ceremony held at the NCC headquarters in Abuja. No reason was given for his absence.
Looking enthusiastic, with a strong desire to introduce fresh vigour into the entire system of the NCC, Danbatta immediately promised to tackle the issue of poor service quality in the industry as soon as he is settles down to business.
The EVC who addressed a cross section of top management staff of the NCC on resumption said he would bring his experience to bear in confronting the challenges of the telecoms industry in Nigeria.
The Professor of Electronics engineering said he would focus on those internationally-acceptable ideals in telecom regulation, as stipulated by the International Telecommunications Union (ITU) that makes quality of service a compelling attraction for the achievement of universal service.
“The concept of universal access is premised on three ‘A’s, as the hallmarks of universal access and they include availability of service, accessibility of service, and affordability of service. These will dictate at all times what we do, and I am sure those were the dictating parameters for improving the quality of service,” he said.
Danbatta admitted there were challenges in the telecommunications industry but that they were not insurmountable. He called for the support and cooperation of the staff of the commission to succeed, affirming that NCC still reckons as the number one telecoms regulator in Africa and the need for the staff to brace up for sustaining the prime position in the interest of the nation.
“We will judiciously use the resources of the commission to ensure that we maintain this position in a manner that will enhance the image and prestige of the Commission as well as serve as a reminder to government of the important role that this agency can play in improving the nation’s Gross Domestic Product (GDP). This, we can only do if all of us live up to our responsibilities as ambassadors of the commission, and in these I urge everybody’s cooperation to enable us accomplish this very important task for the country,” he told the staff.
The formal resumption ceremony which lasted for few minutes was conducted behind closed doors. Private and public media organisations were shut out, NCC top management staff who declined anonymity confided in THISDAY.
The Executive Commissioner, Technical Services, Engr. Ubale Ahmed Shehu Maska, who did the handing over on behalf of the former EVC, confirmed to THISDAY in a telephone interview that Juwah was absent at the ceremony.
Asked why Juwah was absent, he said: “The former EVC wasn’t invited for the ceremony.” On the task ahead for Danbatta, he replied: “Go and ask him.”
Danbatta’s experience in the telecoms regulatory sector spans the academia, as a university don and the industry where he once served as Vice President of the NCC-owned Digital Bridge Institute (DBI).
Danbatta is not new to the telecoms industry and telecom sregulation and was until recently, the Acting Vice-Chancellor of Kano University of Science & Technology, Wudil, before he was appointment as the Executive Vice Chairman of NCC.
He takes over from Juwah, whose five year tenure at the NCC ended July 28, 2015.
Danbatta, an accomplished academician of repute, has served as a lecturer in the Department  of Electrical Engineering, Bayero University, Kano for  28 years,  where  he taught  courses  in  telecommunications  engineering, and  electronics and held academic positions of  Dean of the  Faculty and Head  of  Department  at  different  times.
The new NCC boss was born in Danbatta Local Government Council of Kano State, obtained his Bachelor of Engineering, Master of Science, and Ph.D degrees from the Technical University of Wroclaw in Poland,  and the University of Manchester Institute of Science and Technology UK, respectively.
He has also held high profile administrative responsibilities, including Chairmanship of the  Implementation Committee of Kano State University of  Science & Technology, and subsequently became its pioneer Deputy and  Acting  Vice-Chancellor when it took off in 2001.
He served two terms of five years as a Member of Council for the Regulation of Engineering in Nigeria (COREN). He is also a COREN registered engineer and member of the Nigerian Society of Engineers (NSE). 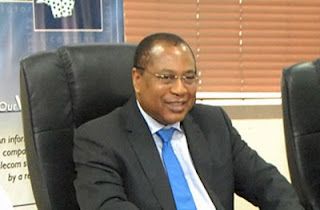