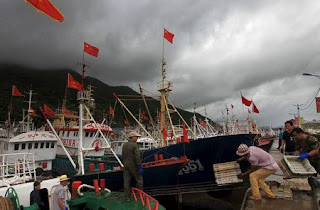 Taiwan evacuated hundreds of people from their homes on Friday as the strongest typhoon to threaten the island in two years churned towards it and was expected to make landfall early on Saturday.
Authorities said 611 people had been moved, most from east coast areas, as Typhoon Soudelor approached. The storm has already claimed its first victims, with two people dead and one missing in choppy waters off the coast of Taiwan’s northeastern Yilan county, the coastguard said.
Flights were cancelled, offices shuttered and schools suspended across the island. The island’s high-speed rail service, operating normally Friday, will be suspended as of Saturday morning.
Wind and rain whipped trees in the capital, Taipei, and media showed waves along the coast as high as five metres (16 feet).
The island’s military said it has put tens of thousands of troops and thousands of vehicles on reserve for rescue operations as flood warnings were issued for parts of the island’s northwest.
The typhoon has been labelled a category 3 storm on a scale of 1 to 5 by Tropical Storm Risk and was expected to rise to category 4 within hours.
It had winds of 173 kph (107 mph) close to its centre, the Central Weather Bureau said, making it the strongest storm to threaten the island since 2013’s Typhoon Usagi.
It has already drawn comparisons to 2009’s Typhoon Morakot, which cut a wide path of destruction over southern Taiwan, leaving about 700 people dead or missing and causing $3 billion worth of damage.
Soudelor has also spurred the end of a week-long protest by students in front of the island’s ministry of education against revisions to history textbooks.
After passing over Taiwan, the typhoon is expected to cross the Taiwan Strait and hit the Chinese province of Fujian, where the government has begun evacuating people who live on the coast.
High speed rail services to or running through Fujian will also be cancelled for much of the weekend, China’s Xinhua news agency said.
The storm could even end up affecting northern China as it slowly grinds its way inland into next week, loosing power but still bringing heavy rain, Xinhua added.
Typhoons are common at this time of year in the South China Sea and Pacific, picking up strength from warm waters before losing strength over land.

I DON'T KNOW ABOUT YOU BUT AM IN LOVE WITH WHAT I SEE.