Share
Facebook Twitter LinkedIn StumbleUpon Tumblr Pinterest Reddit WhatsApp Telegram Share via Email Print
Share
Residents of Myanmar’s low-lying delta region were bracing on Wednesday as flood waters from the north of the country began to flow into the area, pushing river levels dangerously high.
More than 250,000 people have been affected and 69 killed by flooding that was triggered last week by monsoon rains, the Ministry of Social Welfare, Relief and Resettlement said.
The Myanma Ahlin newspaper, which carried the ministry’s statement, also reported that water had risen above spillways at 40 dams across the country.
The government issued a flood warning for people living in the Ayeyarwady delta in Myanmar’s southwest.
According to the Global New Light of Myanmar, elderly people, women and children were being moved out of dangerous areas.
Kyaw Moe Oo, a deputy director from the Department of Meteorology and Hydrology, said the impact of the water inflows could be widespread.
“The whole Ayeyarwady delta region might be affected,” he said.
Myanmar’s Metrological Department said on Wednesday that some rivers in the region were 2-3.5 feet (.6-1 meter) higher than was safe and water levels were expected to rise another 6 inches (15 cm) in coming days.
The Ayeyarwady delta is Myanmar’s major rice producing area and the United Nations has raised concern over the country’s food security.
According to the Myanma Ahlin, more than 1.1 million acres (4,451 sq km) of farmland, most of it rice paddies, have been flooded. More than 65,000 acres have been destroyed.
The government appealed for international aid to bolster relief its efforts on Monday and U. S Secretary of State John Kerry said on Wednesday the United States would announce an aid package.
Speaking in Kuala Lumpur, Kerry said that the U.S. embassy in Yangon was working closely with Myanmar officials to determine priorities for aid.
“We express our hopes that the impact of this can obviously be dealt with minimal further loss of life and disruption,” Kerry told a meeting with Southeast Asian foreign ministers he co-chaired with Myanmar’s foreign minister Wunna Maung Lwin.
Myanmar’s call for international relief marked a major change from 2008 when the then-military government shunned most outside help in the wake of Cyclone Nargis, which killed 130,000 people.
Japan, through the Japan International Cooperation Agency (JICA), said it would provide blankets, mattresses and plastic sheets following the government’s appeal for help.
The Chinese embassy in Yangon has also been distributing relief supplies this week. 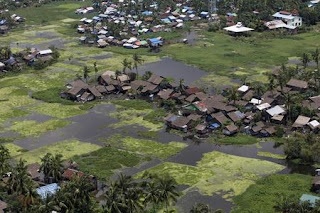 Obama warns of dangers to Israel