Share
Facebook Twitter LinkedIn StumbleUpon Tumblr Pinterest Reddit WhatsApp Telegram Share via Email Print
Share
Republican U.S. Representative Ed Royce, the chairman of the House of Representatives Foreign Affairs Committee, on Tuesday introduced legislation to disapprove of the nuclear agreement between world powers and Iran.
Under the Iran Nuclear Review Act, which President Barack Obama signed into law in May, the Republican-led Congress has until Sept. 17 to approve or disapprove of the nuclear deal between Iran and world powers announced on July 14.
Royce’s announcement means lawmakers will try to pass a disapproval resolution, which could cripple the agreement, rather than a non-binding approval resolution.
The top Republican in the U.S. Senate, Mitch McConnell, said the Senate is also likely to consider a resolution of disapproval of the nuclear deal.
But Obama’s diplomatic initiative won important support in Congress among his fellow Democrats. That means even if Congress passes a resolution of disapproval, Republicans would not likely be able to muster enough votes to override a veto by Obama.
Democratic senators Tim Kaine, who co-authored the legislation giving Congress the right to review the deal, Barbara Boxer, one of the senior Jewish members of the Senate, and Bill Nelson, who some observers had considered a potential swing vote, all have said they will back the deal.
“As dangerous a threat as Iran is to Israel and our allies, it would pale in the threat posed to them and to us by a nuclear-armed Iran,” Nelson said in a Senate speech announcing his decision.
Israeli Prime Minister Benjamin Netanyahu strongly opposes the nuclear agreement, calling it a threat to the survival of the Jewish state 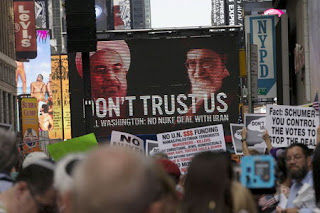