Share
Facebook Twitter LinkedIn StumbleUpon Tumblr Pinterest Reddit WhatsApp Telegram Share via Email Print
Share
Kurdish militia fighting Islamic State in Syria accused Turkey on Saturday of targeting it at least four times in the past week, calling the attacks provocative and hostile.
Turkey began a campaign of air strikes on Kurdistan Workers Party (PKK) camps in northern Iraq and Islamic State fighters in Syria last Friday, in what Prime Minister Ahmet Davutoglu has called a “synchronized fight against terror”.
The campaign has raised suspicions among Kurds that Ankara’s real agenda is checking Kurdish territorial ambitions rather than fighting Islamic State.
The president of Iraq’s Kurdistan region on Saturday condemned Turkey’s bombardment of a village there which he said had killed civilians, and called for a return to the peace process between Ankara and the PKK. Ankara said it would investigate.
The Syrian Kurdish YPG said in a statement on its website that it came under cross-border fire on four occasions in the past week and described sightings of Turkish jets over northern Syria.
The militia, which regularly coordinates with U.S.-led air forces bombing Islamic State, said it had nothing to do with conflict between the PKK and Turkey.
“We consider recent movements of the Turkish military as provocative and hostile actions,” the statement said.
“We ask our partners in the U.S.-led international coalition against ISIS to clarify their approach towards these actions of the Turkish military.”
Turkey made a turnaround last week by granting U.S.-led forces fighting Islamic State access to its air bases.
Pentagon spokeswoman Laura Seal said they had seen reports of the attacks on the YPG.
“We note that the Government of Turkey has clarified that its military action is directed solely at ISIL inside Syria, and, in response to PKK attacks in Turkey, against PKK encampments in Northern Iraq,” she said in a statement.
Seal said the United States supports various groups fighting Islamic State “while also encouraging them to respect the multi-ethnic makeup of areas they have cleared from ISIL.”
ANKARA DENIAL
A senior Turkish official on Saturday repeated Ankara’s previous stance that the recent military campaign does not target YPG but the military reserves the right to fire back within rules of engagement.
“Turkey is not attacking the Kurdish people. It only has a problem with the PKK,” the official said. “We have good relations with the Kurdistan Regional Government and we are not targeting YPG, even though it is affiliated with the PKK.”
Turkish tanks bombarded a position used by YPG and a Syrian rebel group in Zor Maghar village west of Kobani on July 24, wounding four rebels and a number of civilians, the group said.
The senior Turkish official said YPG has not been targeted but the army would respond to any attacks. “If they fire at us, we fire back. We are not in a position to ask for identification in such a situation,” the official said.
YPG said in another incident the Turkish army fired on a YPG vehicle in Tel Fender village, west of Tal Abyad, a town close to one of the border crossings.
In Syria, the YPG is an important force for the U.S.-led alliance against Islamic State because it has been the only notable partner so far on the ground working with the coalition.
But the group has links to the PKK, which is considered a terrorist organization by Turkey, the European Union and the United States, creating an uneasy compromise between Washington and Ankara.
Ankara is concerned that advances by the YPG could stoke separatist sentiment among its own Kurds and embolden the PKK. 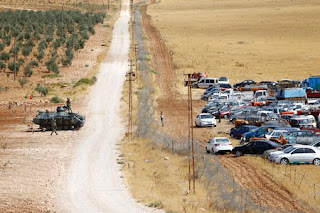