Share
Facebook Twitter LinkedIn StumbleUpon Tumblr Pinterest Reddit WhatsApp Telegram Share via Email Print
Share
Ben Zobrist hit two home runs, Yordano Ventura pitched seven innings and the Kansas City Royals came back to defeat the Toronto Blue Jays, 7-6, on Saturday.
Ventura (6-7) allowed six hits and five runs in seven innings as the right-hander earned his second straight victory to allow the Royals to snap a three-game losing streak.
Right-hander Greg Holland pitched the ninth for his 23rd save of the season despite allowing a walk and a single.
Royals first baseman Eric Hosmer drove in three runs and extended his hitting streak to 14 games, as the Blue Jays had their three-game winning streak end.
Right fielder Jose Bautista hit two home runs for the Blue Jays and third baseman Josh Donaldson hit one.
Blue Jays left-hander Mark Buehrle allowed five hits, no walks and four runs (three earned) and did not factor in the decision.
Right-hander Mark Lowe (0-2) allowed four hits and three runs in the eighth inning to take the loss in his Blue Jays’ debut.
Left fielder Zobrist, obtained in a trade with the Oakland Athletics this week, opened the scoring with a home run with one out in the first inning.
The Blue Jays (53-52) did not have a baserunner until there were two out in the fourth and then they had four singles in a row to take a 2-1 lead.
Bautista started it with a single to left and he was followed by designated hitter Edwin Encarnacion, first baseman Justin Smoak and catcher Dioner Navarro who also singled.
Smoak and Navarro picked up RBIs.
The Blue Jays opened a 5-1 lead on two-out home runs by Donaldson and Bautista in the fifth. Donaldson’s 26th home run of the season also scored shortstop Ryan Goins, who had walked. Bautista hit his 22nd homer on the next pitch.
The Royals (62-41) cut the lead to one with a three-run sixth, a rally started by Buehrle’s error on a one-out grounder by shortstop Alcides Escobar.
Zobrist followed with a double and Buehrle hit center fielder Lorenzo Cain with a pitch to load the bases. Hosmer hit a two-run single and designated hitter Kendrys Morales singled in the other run.
Lowe, who was obtained in a trade with the Seattle Mariners on Friday, replaced Buehrle in the eighth inning. He allowed the second home run of the game and the eighth of the season by Zobrist on a 3-and-2 pitch to tie the game.
Then Lowe allowed a double by Cain, an RBI single by Hosmer and a sacrifice fly by catcher Salvador Perez to give the Royals a 7-5 lead.
The Blue Jays got a run back when Bautista hit his second homer of the game and 23rd of the season to lead off the home eighth against right-hander Wade Davis.
It was the first home run allowed by Davis in 125 2/3 innings dating to Aug. 24, 2013.
In the ninth, Holland walked pinch-hitter Troy Tulowitzki in a 10-pitch at-bat with one out and pinch-hitter Chris Colabello singled to right. Left fielder Ben Revere forced Colabello with a grounder to second for the second out, leaving runners at the corners for Donaldson, who grounded out to third. 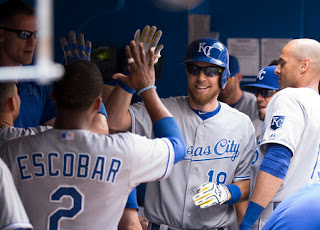