Share
Facebook Twitter LinkedIn StumbleUpon Tumblr Pinterest Reddit WhatsApp Telegram Share via Email Print
Share
Former Presidential Adviser on National Assembly Matters, Senator Florence Ita-Giwa, has  called on President Muhammadu Buhari to as a matter of urgency, resettle and rehabilitate the Bakassi people just the way he is attending to the Internally Displaced People (IDP) in the North.
In a statement signed on Thursday in Lagos, she also endorsed the president’s visit to Cameroun, noting that such visit will reduce tensions along border lines  and ensure peaceful coexistence between the two countries.
Ita-Giwa also aligned with the decision not to appeal the International Court of Justice ruling on Bakassi, adding that time and event had overtaken it due to poor handling and neglect by Nigerian government.
She urged Buhari to employ a political solution to the loss of oil well that has really affected the economic fortune of Cross River State.
The former Special Adviser also commended the Cross River State Governor,  Professor Ben Ayade, for conceiving a sincere interest in the plight of her people and that of the entire people of the state.
The statement read in part: “President Buhari’s visit to Cameroun will further strengthen ties between the two countries.
“I also concur with his decision not to revisit the ICJ ruling because time has overtaken it, hence it’s a course of wisdom not to pursue an exercise that will end in futility.
“However there should be a political solution aimed at resettling my people and recovering the loss of oil well which has affected the economic fortunes of the state.
“The issue of humanity should not be politicised because it’s about the suffering and deprivation of my people. President Buhari should come to our rescue and make living worthwhile for us,” she said. 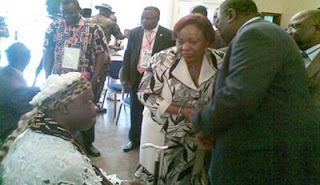