Share
Facebook Twitter LinkedIn StumbleUpon Tumblr Pinterest Reddit WhatsApp Telegram Share via Email Print
Share
By Marice Richter
A rare pre-Civil War baseball card that was handed down as an heirloom within the family of a ballplayer for more than 150 years fetched $179,250 at an auction in Chicago on Thursday.
The Brooklyn Atlantics team card from around 1860 was sold at Heritage Auction’s Platinum Night Sports Auctions, which coincides with the 2015 National Sports Collectors Convention in Chicago.
The auction featured a variety of collectable sports memorabilia items, including a New York Yankees game jersey worn by Mickey Mantle in 1966 that sold for $322,650 and the shoes worn by Muhammad Ali in the 1975 “Thrilla in Manila” bout against Joe Frazier. Those fetched $119,500.
The baseball card, sold to an anonymous buyer, had remained in the family of Archibald McMahon, an outfielder for the Atlantic Base Ball Club of Brooklyn.
The Atlantics were a founding member of baseball’s first organized league, the National Association of Base Ball Players, and reigned as champions from 1859 through 1861, according to Dallas-based Heritage Auction officials.
“This is a seminal artifact, not just of baseball, but of American history,” Chris Ivy, director of sports auctions for Heritage, said in a statement.
It is possibly “the only team card on Earth printed before the first drop of blood was spilled in the American Civil War,” he said.
The card was consigned for auction by Florence Sasso, 75, a descendant of McMahon’s. The card was passed down to her from her mother, who inherited it from other relatives.
A native New Yorker who lives in Massachusetts, Sasso stashed the card inside a book for a while and in a piece of furniture for safekeeping.
She said her late mother, Mildred, loved baseball and cherished the card. 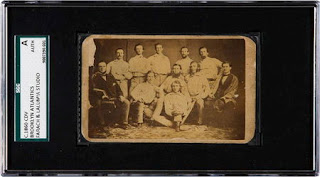 Uber to invest $1 billion in India in next nine months

Nigeria-Cameroun Border to Be Concluded by December