Share
Facebook Twitter LinkedIn StumbleUpon Tumblr Pinterest Reddit WhatsApp Telegram Share via Email Print
Share
By Onyebuchi Ezigbo.The Peoples Democratic Party (PDP) thursday stood by the allegation raised by its National Working Committee (NWC) on Wednesday claiming that the new Director General of the Department of State Security (DSS), Mr. Lawal Daura, was a card-carrying member of the All Progressives Congress (APC) and provided evidence to back its claim.
However, the APC dismissed the allegation by the opposition party, describing it as “absurd and frivolous”.
But the National Publicity Secretary of the PDP, Chief Olisa Metuh, who spoke to journalists in Abuja, described the statement issued by the spokesperson of the ruling party as regrettable.
“First we want to state it very clearly that we stand by the issues as expressed by the National Working Committee and personally presented by the national chairman himself.
“It is on record that he (Daura) was, although he is related to the president personally, the head of the Intelligence unit of the APC and a member of the APC,” he said.
To support the claim, PDP released photographs of Daura with other members of the APC Directorate of Security when they paid a courtesy call on Buhari after he won the presidential election.
It also produced a roster showing Daura’s name, alongside others, under the Directorate of Security.
Metuh said PDP believed that even if the president was free to appoint his relations to political offices, there are sensitive positions that by their very nature require people who are independent.
He also took a dig at the APC spokesman, saying: “We invite Nigerians to look at the physical appearance of the spokesperson of the APC, it is clear that he came out of Aro-clinic for him to make that statement.
“We will take any other person speaking for the government, we will never reply Lai Mohammed.”
Redirecting his focus on Buhari, Metuh added: “The president is at liberty to appoint anybody into any office. Using his discretion. He is the President of Nigeria. He could as well appoint his relation to NNPC, NIMASA, NPA or any other ministry that he deems fit.
“But there are sensitive positions that by their very nature require people who are independent, swayed away from him – people who are qualified but not tied to him by any nexus or affinity with the president.
“We insist that the president, in making those appointments, should abide by universal conventions and democratic tenets and principles. Where you have to respect by separating yourself from those issues that affects the country.
“These issues are on the matter of the electoral body which should be seen to be independent. It shouldn’t have anything to do with you. The same thing applied to security issues, as the sentiments and the emotions of the relation will apply in the execution of security matters and would be be-clouded by his sentiments and emotions.
“This is exactly what has happened in Zimbabwe; this is what was obtainable in Libya, where relatives of President Muammar Ghadaffi was appointed as Chief of Army Staff or head of security. So they visited the people with unknown viciousness not seen. It should not happen in this country.”
Metu also responded to the report on the poor financial position of the party, saying the party was concerned over its portrayal as being broke.
“That is not in contention. What is worrisome from the statements is the angle that we are broke,” he said.
The APC, however, has denied the allegation that Daura is a card-carrying member of the party (APC).The ruling party, which reacted to Wednesday’s claim by PDP, dismissed the accusation as absurd and frivolous.
In a statement issued in Lagos yesterday by its National Publicity Secretary, the ruling party challenged the PDP to publish any evidence it may have to confirm the allegation, adding: “After all, it is trite that he who alleges must prove.
“’In the absence of that, the PDP must call another press conference to publicly apologise to all Nigerians for engaging in a bare-faced lie.”
APC expressed shock that the PDP was exhibiting all the symptoms of hallucinations so soon after its gravy train derailed, saying it was obvious that the party has now started hearing voices.
“We know that the psyche of the PDP has been badly affected by its loss of power at the centre. Even the party itself has admitted that much. That situation has now been compounded by the fact that the party is broke.
“It is therefore not a surprise that it is no longer able to think straight. The reality of its new situation is just beginning to dawn on it.
“But we warned the PDP early on that being in opposition is not a walk in the park. We warned that while the party was used to eating its bread with butter on both sides, it will now be lucky to even have bread to eat,” Mohammed said.
He advised PDP to spend more time patching its “tattered and battered” umbrella, rather than acting as a cog in the wheel of progress of the new administration. 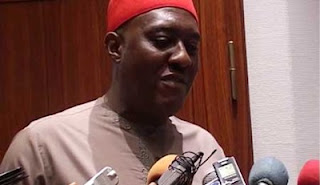 Nigeria-Cameroun Border to Be Concluded by December