Share
Facebook Twitter LinkedIn StumbleUpon Tumblr Pinterest Reddit WhatsApp Telegram Share via Email Print
Share
Complete game are become commonplace for Cleveland Indians starting pitchers.
Right-hander Carlos Carrasco became the third consecutive Indians starter to go the distance, throwing a two-hit gem and leading Cleveland to a 3-1 victory over the Oakland A’s on Thursday night at the O.co Coliseum.
Carrasco (11-8) pitched his fifth career complete game. He struck out seven, raising his season total to 140, and walked one.
“Oh boy, he was good,” Indians manager Terry Francona said. “The first inning he gives up an infield hit and then a double, and then after that, that was it.
“He pounded the strike zone, he established his fastball, and off of that, he threw a real good changeup, breaking ball. And again, just kept them at bay the whole night. That’s a good feeling. We get three in the first and make it stand.”
Cleveland’s Trevor Bauer pitched a complete game against Kansas City on Tuesday, and Corey Kluber followed suit against the Royals on Wednesday. The last major league team to have complete games on three consecutive days was Oakland from July 31-Aug. 2, 2010, when Dallas Braden, Gio Gonzalez and Trevor Cahill accomplished the feat.
“It feels good,” Carrasco said of continuing the streak. “You kind of compete a little bit.”
Carrasco gave up a run in the first inning, then blanked the A’s over the next eight frames. He won his fourth straight road start and improved to 7-2 away from Progressive Field.
First baseman Carlos Santana hit a two-run homer during a three-run first inning for the Indians. Shortstop Francisco Lindor went 2-for-4, stole a base and scored a run.
A’s right-hander Chris Bassitt (0-4) gave up three runs on six hits over seven innings, striking out six and walking one. Bassitt gave up all three runs in the first, then pitched six straight shutout innings. In his past five starts, he has allowed a combined 10 runs over 29 innings (3.10 ERA) but emerged with zero wins.
“We’re just not giving him any run support,” A’s manager Bob Melvin said. “He hasn’t won a game yet, but I don’t think he’s given up more than three runs. He’s been good, and he knows he’s here for a while. He’s done a nice job.”
A’s right fielder Josh Reddick went 1-for-4 with an RBI double, and center fielder Billy Burns went 1-for-4, stole a base and scored a run.
After the first inning, Carrasco allowed just two baserunners, one on an error and the other on a walk. Neither runner got past first base.
Carrasco has been the subject of trade rumors the past few weeks approaching Friday’s non-waiver trade deadline. Francona talked to Carrasco last week about those rumors and tried to calm his nerves.
“It looked like it was bothering him a little bit (before we spoke),” Francona said. “So I just said, ‘Hey man, teams call because you’re coveted. That’s a good thing.’ We’re not dying to let our pitching go away, and they know that.”
Lindor hit an infield single with one out in the first inning, igniting Cleveland’s three-run rally. Left fielder Michael Brantley then sliced an opposite-field double to left. The ball ricocheted off the wall just beyond the bullpen and bounced past left fielder Sam Fuld for an error as Lindor raced home.
Santana made it 3-0 with a two-run shot over the center field fence, his 12th home run of the season.
“I’m kind of a guy that gets ready really quick in the bullpen and I feel like I just got ready a little too fast today,” Bassitt said. “I probably had 10 minutes sitting there in the dugout just waiting and waiting. I feel like my stuff wasn’t sharp the first inning, and after that, I kind of got going. I wasn’t sharp in the first inning, and they made me pay.”
The A’s answered with a run in the bottom of the first. Burns led off with an infield single, stole second and scored on Reddick’s one-out double down the right field line. 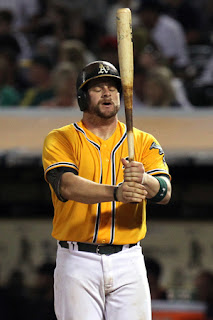