Share
Facebook Twitter LinkedIn StumbleUpon Tumblr Pinterest Reddit WhatsApp Telegram Share via Email Print
Share
By Alisa Tang
BANGKOK (Thomson Reuters Foundation) – Authorities and relief workers in flood-hit Myanmar are rushing to provide aid to thousands of people after weeks of heavy rains that have killed at least 21 people this month, aid agencies said.
Seasonal rains since late June have inundated large swathes of the country, while heavy winds and rains on Thursday and Friday battered Rakhine and Chin states, bordering Bangladesh.
President Thein Sein said the worst-hit areas were four areas in the northwest and west: Chin State, Magwe Region, Sagaing Region and Rakhine State.
Myanmar authorities say 21 people died in July, and that between 67,000 and 110,000 people were “severely affected” by the floods, according to an update from the U.N. Office for the Coordination of Humanitarian Affairs (OCHA).
“I’ve never experienced such a terrible flood in my life,” Thein Tun, a 57-year-old retired teacher, said by telephone from Mrauk-U in western Rakhine state, one of the worst-hit areas that has yet to receive aid.
“The entire town has been under water for a few days.”
OCHA spokesman in Myanmar Pierre Peron said the road to Mrauk-U and nearby townships north of the Rakhine capital, Sittwe, had been cut off, adding that the best chance of reaching these areas was by boat when the weather improved.
OCHA staff are also assessing damage at camps around Sittwe for some 90,000 internally displaced people (IDPs) – most of them Rohingya minorities who were forced from their homes by sectarian clashes in 2012.
The teams had not yet reported back because phone lines were down, Peron said.
Rakhine State’s chief minister, Maung Maung Ohn, said Mrauk-U was covered by floodwaters.
“Even when food and other relief items are airlifted by helicopters to the flooded town, there is no place to store these goods and no roads for the trucks to drive on,” he said in an interview with Myanmar’s MRTV.
Nearly 525,000 acres of rice paddy fields have been flooded, the Ministry of Agriculture and Irrigation said.
The Myanmar Red Cross has deployed 244 volunteers to help local authorities to evacuate victims and distribute items such as mosquito nets, tarpaulins, toiletries, cooking sets and water purification tablets, said Araceli Lloret, disaster management coordinator for the International Federation of the Red Cross.
The Myanmar Red Cross and international aid groups are due to meet on Saturday to set up a more comprehensive plan, she said.
The World Food Programme has dispatched food aid for 10,880 people and will start distributions of food rations and high energy biscuits early next week in two townships in Sagaing, the OCHA update said.
The Myanmar Department of Meteorology and Hydrology is forecasting further heavy rains and strong winds in the coming days across much of the Southeast Asian country, it said.
“The situation therefore remains dynamic and more people are likely to be affected by flooding and strong winds over the next few days, in particular in Rakhine state,” it said. 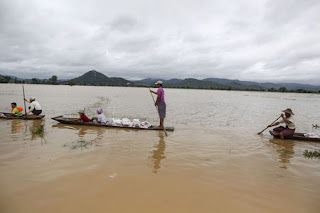