Share
Facebook Twitter LinkedIn StumbleUpon Tumblr Pinterest Reddit WhatsApp Telegram Share via Email Print
Share
Ukraine has banned French actor Gerard Depardieu from entering the country for five years, its state security service said on Wednesday, apparently for making comments that suggested he supported Russia’s annexation of Crimea last year.
Government spokeswoman Olena Hitlyanska said the 66-year-old, known for films such as Cyrano de Bergerac and Green Card, had been on a blacklist of public figures deemed to be unsympathetic towards Ukraine’s in its conflict with Russia.
She did not cite any specific comments from Depardieu.
This month Culture Minister Ivan Kirilenko said that Depardieu was on a list of 117 prominent figures in the arts and entertainment world “who have spoken out in support of the violation of Ukraine’s territorial integrity and sovereignty”.
Depardieu, who is notorious for riotous antics off-screen and scrapes with the law over drink-driving, motorbike accidents and his outspoken criticism of high taxes in France, was granted Russian citizenship by Russian President Vladimir Putin in 2013.
He has since defended Russia’s international policies in interviews with French and other media.
Russia annexed Crimea in March 2014 after pro-Europe street protests in Ukraine chased a Moscow-backed leader from power, and has supported separatists in Ukraine’s east in a conflict in which more than 6,500 people have been killed. 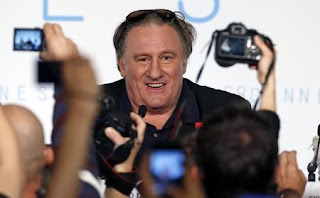