Share
Facebook Twitter LinkedIn StumbleUpon Tumblr Pinterest Reddit WhatsApp Telegram Share via Email Print
Share
Thailand is working flat out to combat human trafficking, Prime Minister Prayuth Chan-ocha said on Tuesday, adding he hoped Thailand would be lifted from a U.S. list of worst human trafficking centers next year.
The U.S. State Department highlighted in its annual report on trafficking on Monday the suspected role of Thai officials as an obstacle Thailand will have to overcome to stop the trade.
The report covered Thailand’s efforts to eliminate trafficking for the year through to March.
A recent crackdown came too late to persuade the United States to take Thailand off the list, Prayuth said, but U.S. diplomats recognized his administration’s intent to end trafficking.
“The U.S. embassy has seen our intention and we hope it will be better (in the next review),” Prayuth told reporters.
“We have been working at full capacity to resolve human trafficking. But the timing of their evaluation was in the early stage of our work.”
Thailand, a long-time U.S. ally whose relations with Washington have cooled since a military coup led by Prayuth last year, said it “strongly disagrees” with the decision to keep it on the lowest ranking.
The Thai embassy in Washington said the decision failed to take into account “significant efforts undertaken by the Thai Government on all fronts during the past year”.
Prayuth ordered a crackdown after the discovery of dozens of bodies at suspected trafficking camps in southern Thailand in May. The crackdown disrupted routes through Thailand used by smuggling networks.
Smugglers abandoned ships crowded with migrants from Bangladesh and Myanmar rather than risk landing in Thailand. A humanitarian crisis unfolded at sea, and images of starving migrants drifting on boats drew international outrage.
Thai authorities have since indicted 72 people, including 15 state officials, over suspected links to trafficking in what police said was their biggest investigation of people smuggling.
The most senior official to face trafficking charges is Manus Kongpan, a three-star army general who surrendered to police on June 2. He denies all charges, which include human trafficking, holding people for ransom and hiding corpses.
The U.S. embassy in Thailand said it welcomed additional efforts by Thailand since March 31, which would be covered in next year’s report.
“We anticipate high-level engagement between U.S. and Thai officials both in Thailand and in international fora on this important issue,” the embassy said.
Deputy Prime Minister General Tanasak Patimapragorn said the United States had complimented recent efforts and he was “confident” of being lifted from the lowest ranks of human trafficking centers next year. 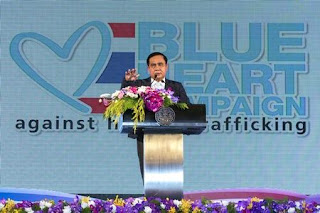