Share
Facebook Twitter LinkedIn StumbleUpon Tumblr Pinterest Reddit WhatsApp Telegram Share via Email Print
Share
Turkish fighter jets pounded Islamic State targets in Syria early on Friday, the prime minister’s office said, after Turkey said it would take any “necessary measures” to protect itself from Islamist and Kurdish militant attacks.
Police, backed by helicopters and special forces, also launched overnight raids on more than 100 suspected Islamic State and Kurdish militant locations in Istanbul, according to media reports. Some 5,000 officers were deployed in the operation.
Three F-16 fighter jets took off from a base in Diyarbakir, southeast Turkey, in the early morning and hit two Islamic State headquarters and one “assembly point” before returning, the Prime Minister’s office said in a statement.
“Turkish fighter jets didn’t cross the Syrian border during the operation,” said one official, adding that the attacks had taken place in an area of Syria, across the border from the Turkish town of Kilis.
A cross-border firefight on Thursday in the same area between the Turkish army and Islamic State left one militant and one soldier dead.
Broadcasters CNN Turk and NTV reported that anti-terror police raided more than 100 locations across Istanbul.
A press officer for the Istanbul police declined to comment.
The Prime Minister’s Office said on Thursday that Turkey will take any necessary measures to protect public order and national security following attacks by Islamic State and Kurdish militants.
It has been hit by a wave of violence in the largely Kurdish southeast after a suspected Islamic State suicide bombing killed 32 people, many of them Kurds, in a town on the Syrian border. 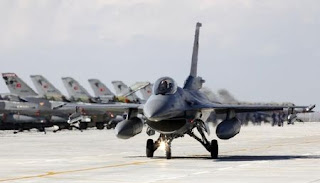