Share
Facebook Twitter LinkedIn StumbleUpon Tumblr Pinterest Reddit WhatsApp Telegram Share via Email Print
Share
The developer of the $3.5 billion Baha Mar mega-resort is willing to commit up to $200 million to jumpstart the stalled Bahamas project, lawyers told a U.S. bankruptcy judge on Thursday.
Baha Mar, which will feature a Las Vegas-style casino and more than 2,000 hotel rooms, is nearly complete, but construction stopped several months ago because of a dispute between the developer and the main contractor, Chinese State Construction Engineering Corp Ltd’s China Construction America.
The developer of the project is Sarkis Izmirlian, whose Baha Mar Ltd filed for bankruptcy protection in Delaware last month. He is the son of Armenian peanut and real estate tycoon Dikran Izmirlian. The Izmirlians have invested more than $900 million in the project.
Izmirlian has been negotiating with China’s Export Import Bank, which bankrolled most of the project with a $2.45 billion loan. No deal has been struck, however.
During the bankruptcy court hearing on Thursday in Wilmington, Delaware, lawyers for Baha Mar Ltd did not provide details on the terms necessary for Izmirlian’s commitment for the $200 million.
Other parties did not respond to the comment from the Baha Mar attorney during the hearing, which lasted less than 10 minutes.
Izmirlian has blamed the Chinese construction company for the delays that forced the resort to miss its opening in late March. CCA says his development team mismanaged the project. 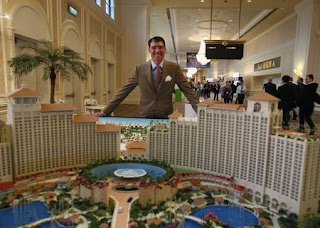