Share
Facebook Twitter LinkedIn StumbleUpon Tumblr Pinterest Reddit WhatsApp Telegram Share via Email Print
Share
Venezuelan hardline opposition leader Maria Corina Machado said on Tuesday she had been barred from public office for a year, a move that could prevent her from becoming a congresswoman if she wins a seat in December’s parliamentary election.
Machado has 15 days to appeal the decision, according to the letter from the comptroller’s office she posted on Twitter. The decision would still allow her to run for parliament.
It was not immediately clear on what grounds she was barred and the comptroller’s office could not be reached to comment. The comptroller’s office has in the past disqualified candidates from holding public office for irregular use of public funds. Opposition leaders say these are excuses to sideline political opponents.
“They’re acting like the dictators they are,” tweeted Machado, a parliamentary candidate in the central Miranda state.
“They should prepare themselves, we’re going to act like the majority we are.”
Polls predict Venezuela’s struggling socialist government will lose the Dec. 6 parliamentary election amid a scarring recession, spiraling inflation and shortages of basic goods including medicines and corn flour.
Anti-government activists say President Nicolas Maduro is seeking to avoid a bruising defeat by cowering the opposition and altering the playing field.
Daniel Ceballos, a jailed former mayor who is also running for parliament, was similarly banned from holding public office. Local media said he was disqualified for not presenting a sworn wealth declaration.
The MUD opposition coalition also cried foul after the electoral board mandated a minimum of 40 percent of candidates be women a month after the bloc held its primaries.
OBJECTIVE MACHADO?
“Venezuela’s opposition leaders are the desperate government’s target,” the MUD opposition said on Twitter. “The new objective is Maria Corina Machado.”
It is not the first time Machado, a leader of last year’s massive street protests, has clashed with the government, who derides the wealthy English-speaker as the representative of an out-of-touch Venezuelan elite.
She was stripped of her seat in the National Assembly last year on charges she violated the constitution by accepting an invitation from Panama to speak against Maduro at a meeting of the Organization of American States.
The state prosecutor’s office then indicted her in December on charges that she took part in an alleged plot to kill Maduro.
She has vigorously denied the accusations.
Machado is loathed by many government supporters, who frequently point out she signed a decree that dissolved state institutions during a de facto government that ruled for less than two days in a botched 2002 coup against the late Hugo Chavez.
Hardline members of Venezuela’s opposition admire her for taking a tough stance against the government. 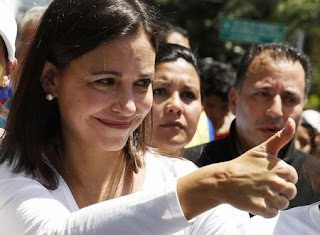