Share
Facebook Twitter LinkedIn StumbleUpon Tumblr Pinterest Reddit WhatsApp Telegram Share via Email Print
Share
Usain Bolt will compete at the London Anniversary Games later this month, the six-time Olympic champion confirmed on Friday.
The 100m and 200m world record holder has struggled for form and fitness this year and the Jamaican pulled out of scheduled Diamond League appearances in Lausanne and Paris.
However, the 28-year-old Bolt, who took three Olympic gold medals at the 2012 London Games, hopes to gain some much-needed track time ahead of the World Championships which take place in Beijing from Aug. 22-30.
“London is a special place where I love to compete and I am looking forward to the Anniversary Games,” Bolt said in a statement.
“I have great memories of competing in the Olympic Stadium in the summer of 2012 and in the previous Grand Prix meets in London.”
Bolt will be making his first appearance in London since the 2013 Anniversary Games and his decision to run comes after British Chancellor George Osborne waived UK income tax for athletes based overseas in this week’s budget. 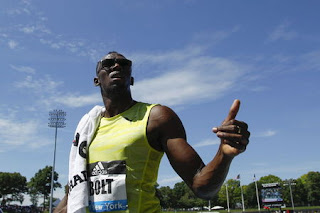 The London Anniversary Games take place at the Olympic Stadium from July 24-26.

Euro rose across the board on Friday, jumping 2 percent against the yen

To much to cope with: blessings from God