Share
Facebook Twitter LinkedIn StumbleUpon Tumblr Pinterest Reddit WhatsApp Telegram Share via Email Print
Share
Hundreds of Shi’ite and Sunni Muslims prayed for national unity at Kuwait’s grand mosque on Friday, vowing to block any attempt to stir sectarian division a week after an Islamic State staged the country’s deadliest militant attack.
The Sunni group, which sees Shi’ites as heretics and wants to expel them from the Arabian peninsula, claimed responsibility for a June 26 suicide bombing on a Shi’ite mosque in Kuwait City that killed 27 and wounded more than 200.
Shi’ite member of parliament Adnan Abdulsamad told Reuters Islamic State were “fools” for thinking they could destabilize Kuwait and the attack had only made Kuwaitis more determined to promote solidarity.
“This prayer is a prayer of unity,” he said. “This heinous crime only brings us further strength and tolerance. Thank God it made our enemies fools. Were they under the illusion that with this crime they would create discord?”
Although a strategic minnow, Kuwait is an oil power and a supporter of U.S.-backed efforts to fight Islamic State, providing intelligence, funding and the use of airfields for a Western-Arab coalition fighting the hardline militants.
Relations have traditionally been good between the 70 percent of Kuwait’s 1.4 million citizens who are Sunni and the Shi’ites who make up 30 percent, but regional rivalry between Sunni Saudi Arabia and Shi’ite Iran has caused some strains.
“Keep our nation safe and protect us from sedition,” said Sunni imam Waleed al Ali, reciting a prayer for a congregation that included the emir Sheikh Sabah al-Ahmed al Sabah.
Kuwait has detained 90 people in connection with the bombing, closed a charity for alleged militant ties in raising funds for Syrians and its parliament passed a law making it mandatory that authorities keep a record of all residents’ DNA.
Kuwait’s interior minister said on Tuesday the Gulf Arab country was at war with Islamist militants and would strike out at cells still believed to be on its soil.
The attack was carried out by a Fahd Suliman Abdul-Muhsen al-Qabaa, a man in his early 20s from Saudi Arabia, where Sunnis form the vast majority and showed Islamic State making good on a threat to step up violence in the holy fasting month of Ramadan. 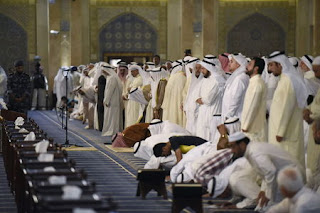