Share
Facebook Twitter Google+ LinkedIn StumbleUpon Tumblr Pinterest Reddit WhatsApp Telegram Share via Email Print
Share
Oil reversed losses to end slightly higher on Monday as short-covering ahead of the expiry of the front-month contract in U.S. crude lifted a market burdened by concerns about creeping gasoline inventories.
Worries about the potential fallout from the Greek debt crisis also weighed on oil prices initially, offsetting positive impact from a stockpile draw at the Cushing, Oklahoma delivery point for U.S. crude futures reported by oil services firm Genscape.
Brent crude settled up 32 cents, or 0.5 percent, at $63.34 a barrel, after falling almost $1 earlier.
U.S. crude closed up 7 cents, or 0.1 percent, at $59.68 a barrel, as its front-month July contract expired and went off the board after losing nearly 70 cents at one point.
Despite the rebound, many analysts and traders were pessimistic on the market’s outlook in the near term.
“It’s still pretty much a bearish picture, particularly for gasoline. What we had today was just short-covering from some nervous individuals,” said Dominick Chirichella, senior partner at the Energy Management Institute in New York.
Gasoline futures fell more than 1 percent, retreating from last week’s near eight-month high and leading the oil complex lower.
U.S. gasoline stocks unexpectedly rose by nearly half a million barrels in the week to June 12. Meanwhile, domestic U.S. crude output has remained at around 1970s highs of about 9.6 million barrels per day. [EIA/S]
“One of the biggest supporters of the U.S. crude rally has been the products markets. But there’s concern we may have overproduced gasoline lately, just like how we’ve been doing with crude,” said Matthew Perry at Kronenberg Capital Advisors, an energy-focused hedge fund in Oreland, Pennsylvania.
U.S. oil producers added a rig each in the key Permian and Bakken shale basins last week, even as the total number of rigs fell. This fueled concerns that the recovery in crude prices in recent months was coaxing drillers to expand activity. [RIG/U]
U.S. oil output could decline later this year but will likely pick up in 2016 by 150,000 bpd at the current rig count, Goldman Sachs said in a note.
The market will be looking for more evidence of U.S. product demand in weekly supply-demand data due from the government on Wednesday, after Genscape’s report on Monday of a near 2 million-barrel draw at Cushing, traders said.
On the Greek front, euro zone finance ministers welcomed new Athens proposals for a cash-for-reform deal but said it would take more work to avert a default. 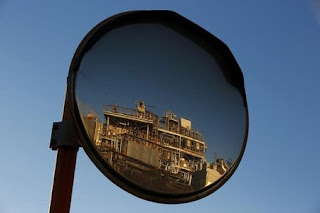 Syrian Kurds on the offensive