Share
Facebook Twitter LinkedIn StumbleUpon Tumblr Pinterest Reddit WhatsApp Telegram Share via Email Print
Share
First lady Michelle Obama chopped parsley and pine nuts for a salad with 20 school children in Milan on Wednesday to spread her message: Make more home-cooked meals, and you will be healthier.
Flanked by American celebrity chefs John Besh and Mario Batali, Obama showed students from the American School of Milan how to cook, as part of her “Let’s Move” initiative aimed at boosting nutrition and combating obesity among children.
Obama is due to visit Milan’s nutrition-themed Expo 2015 world’s fair on Thursday, with an entourage including former basketball star Alonzo Mourning and cutting-edge urban farmer Will Allen.
She said obesity has doubled globally since 1980.
“If you cook, you take a lot of control over what you eat, you can control the portions … and it’s a lot of fun,” Obama told the group of 11- to 14-year-olds sporting white aprons they made especially for the visit.
Obama recalled how in her pre-White House days she rushed her daughters Sasha and Malia between activities, with no time to eat properly. Eventually, a pediatrician told her to slow down.
“So I cooked more,” she said. “A lot of times, it was something simple … but it was healthy … and now our kids have no health issues at all.”
Living at the White House, Obama never cooks, but she urged families to spend time together at the dinner table, saying her husband, President Barack Obama, stops at 6:30 p.m. every day to sit down with his family.
“At a dinner table everyone slows down; you are actually tasting it, and you probably eat less because you’re not shoveling it down,” she said. “Well, the president shovels sometimes.”
Obama, her teenage daughters and her mother Marian Robinson also met Italian Prime Minister Matteo Renzi and his wife and daughter. They viewed Leonardo Da Vinci’s “The Last Supper,” a 15th-century mural that depicts the final meal Jesus shared with his apostles before his crucifixion.
The salad, which also included lentils, quinoa and fregula – a Sardinian pasta similar to couscous – did not fill the bellies of all the children.
“Is that the only thing we are going to eat?,” one boy asked as the first lady hugged and autographed her way out of the room.
The female Obamas will visit Vicenza and Venice in the coming days before returning to the United States on Sunday. 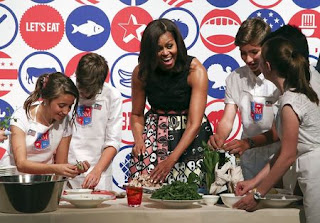