Share
Facebook Twitter Google+ LinkedIn StumbleUpon Tumblr Pinterest Reddit WhatsApp Telegram Share via Email Print
Share
By Sharat Pradhan and Aditya Kalra
The packets of Nestle’s Maggi 2-Minute Noodles that triggered India’s worst food scare in a decade almost got lost in the mail.
Returned months later to the north Indian food inspector who first sent the samples – after a detour via Shimla in the Himalayas – the consignment eventually reached a laboratory in Kolkata, where tests found seven times the legal levels of lead.
From there, what began as a minor labeling dispute that according to a local magistrate could have been settled with a $400 fine, spiraled into Nestle’s worst public relations crisis to date in India.
The scare over Maggi instant noodles, one of India’s most popular snacks, has gripped increasingly health-conscious consumers.
It has also highlighted shortcomings in the country’s food safety network.
Uttar Pradesh, where the crisis began, has a population the size of Brazil’s but the state’s Food and Drug Administration (FDA) has only five laboratories – or one per 40 million people.
Asked by the central Food Safety and Standards Authority of India (FSSAI) to run checks, FDA officials in another state did not know the lead limit, FSSAI head Yudhvir Singh Malik said.
“We need to strengthen the food safety infrastructure,” Malik told Reuters.
But the FSSAI has nonetheless stood by its testing, saying in a report on Friday they had “overwhelming evidence” that Maggi noodles were “unsafe and hazardous”. India has also filed for damages from Nestle. Regulators have not said how the product might have become contaminated.
The Swiss-based company has challenged the test findings and stresses its snack is safe. In its representations to the FSSAI, Nestle said the sample could have been contaminated during its lengthy transit, although it gave no evidence that was the case.
HOLI CHECKS
Nestle’s woes began last year, on the eve of Holi – India’s spring festival of colors and a time of indulgence for many – when inspectors were on the lookout for adulterated foods at retailers in Barabanki, a town of 150,000 in Uttar Pradesh.
“That is the time for aggressive checking of adulteration on food products – particularly snacks,” Barabanki food safety officer Sanjay Singh told Reuters at his shabby office.
Inspectors picked up samples of Maggi noodles, sold in an instantly recognizable bright yellow package for as little as a dozen rupees (under 20 U.S. cents), from a local supermarket.
The samples were sent to a state laboratory in Gorakhpur, which reported on April 24 that labeling containing the words “No added MSG” violated Indian regulations.
According to a local magistrate, the same Gorakhpur lab had found monosodium glutamate in Maggi noodles in 2013. The retailer who sold the noodles paid a fine of 25,000 rupees ($400) for a similar violation. That was the end of the matter.
Nestle appealed against the April 2014 ruling, however, stating that the noodles contained MSG as the result of a natural process.
“Nestle was apparently over-confident about their product, otherwise the company would not have preferred an appeal and instead paid up the penalty of 25,000 rupees,” said Yogeshwar Ram Mishra, a Barabanki district magistrate.
LOST IN THE MAIL
Nestle paid 1,000 rupees to have the sample from the Barabanki supermarket tested at the Central Food Laboratory in Kolkata, a government referral lab. It was sent by government post only to be returned two months later from Shimla, said local food safety officer Singh.
When the Kolkata lab presented its results in a report dated April 7 – more than a year after the samples were first taken – as well as confirming the violation of labeling rules it said the sample had tested positive for lead.
Nestle said it would be inappropriate to comment on the details of the tests. But its arguments challenging the findings were presented in an eight-page notice published by the FSSAI on Friday that ordered the withdrawal of Maggi noodles.
The notice said Nestle bosses had argued at a meeting with the regulator that the tests at the Kolkata lab had “showed a very high level of lead because the samples remained open for a long period of time before being tested”. It did not elaborate on how that could have caused the sample to be tainted.
That argument was rejected by the FSSAI. The head of the Central Food Laboratory in Kolkata, A.K. Adhikari, said: “We stick by the result and nothing can change it.”
Adhikari declined to comment when asked whether the Kolkata lab had found similar results in further tests on Maggi noodles. The test on the Barabanki batch showed a lead content of 17.2 parts per million (ppm), compared with a legal limit of 2.5 ppm, a copy of the lab report seen by Reuters showed.
In the first public appearance by management since the scare began, group CEO Paul Bulcke told reporters in New Delhi on Friday that Nestle’s own and third-party tests had found that the product was “safe for consumption”.
Nestle now has less than two weeks to convince the regulator why product approval for its noodles should not be withdrawn. 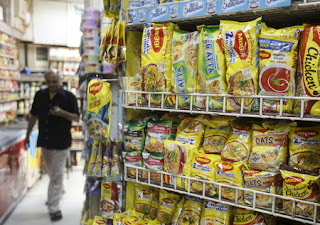 3 Ways to Use Mobile To Your Advantage