Share
Facebook Twitter LinkedIn StumbleUpon Tumblr Pinterest Reddit WhatsApp Telegram Share via Email Print
Share
Ed note: This has been a big week for transgendered community. First there wasCaitlyn Jenner’s Vanity Fair cover, and yesterday Make Up For Ever unveiled its campaign with model Andreja Pejic, making her the first transgender model to land a major cosmetics contract. In our Summer edition of Glam Belleza Latina, which comes out next week, writer Celia San Miguel talked to another trans woman, Latina model Gisele Alicea, about her journey of claiming her true identity despite all the challenges that lay ahead. Much like actress Laverne Cox, who recently said that diverse representation is needed is the media, Alicea agreed. “I want to be treated like everyone else, with respect.” This is her story.
Years before I heard the term transgender, I was a seven-year-old boy who loved dressing up in girls’ clothing. Named William Alicea and raised with three sisters by a single Dominican mom in the predominantly Hispanic Hamilton Heights section of New York City, I knew even then how the Latino community expected boys to behave. I’d overhear my family say men shouldn’t cook or clean, because that was women’s work—and other such machista comments. And they definitely didn’t think boys should dress like girls. But I did it anyway. My mother didn’t love me prancing around in my older sisters’ clothes, but I know that she was just trying to spare me from being harassed.

Throughout childhood I had crushes on boys and knew that I was gay, but I didn’t tell a single soul. No one ever talked about homosexuality—ever! I was 15 when I came out to my school guidance counselor, who referred me to a support group at the Hetrick-Martin Institute at the Harvey Milk High School. When I finally told my mom that I was gay, we cried together. She tried hiding her sadness, but I could see right through it.
It was at the Institute where I first discovered that transgender women even existed. They were so glamorous, so proud! By the time I was 17, after experimenting with drag for a few years (I did it even though I was scared to walk around my neighborhood dressed like that), I knew I wanted to become a transgender woman. I was already pretty informed about transsexuals from talking to doctors and counselors at the Institute, so I went for it. Of course I sought my mom’s opinion. Thankfully, she fully supported me and came to every doctor’s appointment, like for the hormone injections. She was amazing. I even changed my name to Gisele (her middle name) in her honor.
As my body began to look more female—I had gotten breast implants too—I wanted so desperately to have that voluptuous Latina booty. I was self-conscious about my skinny, boyish frame, so I’d pad my body before going out. It wasn’t until my sister pointed out that I had a “model” figure that I decided to own my thinness. Eventually my confidence was untouchable.
Around the year 2000 I was approached by a scout on the street who asked if I modeled. Right away I told her that I was transgender, assuming she’d lose interest, but she agreed to photograph me anyway. I loved modeling after that test shoot. I never signed with an agency, though, because at the time it wasn’t acceptable to be a transgender in the fashion industry. They would’ve laughed at me.
During that period I became immersed in New York City’s ballroom scene, mainly with the House of Xtravaganza (that’s where I got my stage name, Gisele Xtravaganza), which is like an underground sorority for LGBT youth; it was founded in 1982 as the first all-Latino ballroom house. (Madonna plucked a few dancers from it for her iconic “Vogue” video and Blond Ambition tour.) It’s still such an empowering place for transsexuals. They put us on a pedestal when, in the real world, that’s often far from the case. Photographers started shooting me while I was doing runway shows at the House of Xtravaganza. Soon after, I appeared in fashion spreads for mainstream magazines including Interview and Dazed & Confused, and walked in runway shows for The Blonds, Chromat, and others.
It’s wonderful to be part of this growing acceptance of transgenders in fashion and media. Celebrities like Laverne Cox and models Carmen Carrera and [America’s Next Top Model contestant] Isis King have made great strides for this community by being open about it. And obviously there’s a lot of talk about it now because of Bruce Jenner, but it shouldn’t have taken a reality show to get people interested and aware. Regardless, this conversation creates a movement toward accepting not only those living glamorous, high-profile lives but also the transgender people who are doctors, philosophers, and CEOs. That’s why I agreed to participate in Barneys New York’s Brothers, Sisters, Sons & Daughters campaign and film last year, which focused on trans models. I also got to be photographed with my mother. “I’m on bus stops!” she said when the ads came out. “I’m famous now!” She loved it.
Transgender Model Gisele Alicea 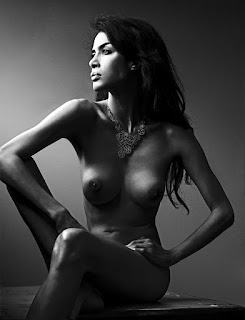 Massive breach of federal personnel data in US Officials