Share
Facebook Twitter LinkedIn StumbleUpon Tumblr Pinterest Reddit WhatsApp Telegram Share via Email Print
Share
KFC wants the world to know: There’s no such thing as an eight-legged, six-winged chicken.
Among the urban legends that have dogged the fried-chicken chain for years, it seems a particularly stubborn one alleges that the company has created a mutant strain of arachnid chickens capable of producing a bumper crop of drumsticks and hot wings.
Apparently, the rumors have proved so persistent in China, where KFC is the largest fast-food purveyor of fried chicken, that parent company Yum Brands has filed suit against three companies, according to Reuters, that it charges have been among the most persistent online rumormongers: Yingchenanzhi Success and Culture Communication, Shanxi Weilukuang Technology Co., and Taiyuan Zero Point Technology.
Lost in the translation here is why, exactly, these three companies might have fueled a widespread campaign of chicken disinformation on the Internet. Neither Reuters nor any of the news organizations that have picked up the story appear to speculate about what might have motivated the corporate triad to try to bring down KFC with stomach-turning allegations of monster spider chickens.
The chain says it has found upwards of 4,000 messages online containing libelous claims—including photos!—that have been viewed more than 100,000 times. KFC is seeking the equivalent of $242,000 from each defendant as well as an apology. The Shanghai Xuhui District People’s Court has accepted the case, according to the Associated Press.
Even as KFC pursues tough legal action to defend its reputation, its PR response would appear at once dismissive and also possessed of a healthy dose of online snark—though again, there may be something off in the translation here. As Reuters reports, a statement on KFC’s China website reads, “The rumors about KFC using chickens with six wings and eight legs have been around a long time,” and it goes on to chide the gullible for even entertaining the notion that such a thing were scientifically possible, saying that if the company had somehow managed the feat, “it could be in the running for a Nobel Prize.”
As recently as February, KFC found itself on the defensive yet again here in the U.S., fending of similar rumors about Frankenchickens as well as the decades old canard that the federal government had ordered the chain to switch its name from Kentucky Fried Chicken because it had stopped serving up “real chickens” in favor of test-tube-generated, genetically engineered creatues that are a far cry from a barnyard bird.
“There is absolutely no truth to this ridiculous urban legend, which has been debunked many times,” a KFC spokesman told Business Insider via email. “KFC uses top quality poultry from trusted companies like Tyson and Pilgrim’s Pride—the same brands customers know from their local supermarkets.”
Yet in a bizarre way, could the rumors about spider chickens turn out to be not such a bad thing for KFC? Sure, some conspiracy-minded sliver of the population will no doubt continue to want to enlighten the rest of us about the “truth” regarding what those mad scientists are up to over at KFC and other fast-food chains. But next to outlandish rumors like the eight-legged chicken, the scary reality of what Big Food is actually doing on its factory farms comes to seem, well, normal.
“Modern factory-farmed chickens look very little like their wild chicken ancestors,” as the ASPCA describes it. “Thanks to selective breeding—combined with low-dose antibiotics, excessive feeding and inadequate exercise—factory-farmed meat chickens grow unnaturally quickly and disproportionately. While their breasts grow large to meet market demand, their skeletons and organs lag behind. Many suffer heart failure, trouble breathing, leg weakness and chronic pain. Some cannot support their own weight and become crippled, unable to reach food and water.” 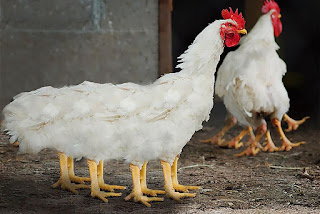