By Lucia Mutikani
WASHINGTON (Reuters) – U.S. consumer spending unexpectedly stalled in April as households cut back on purchases of automobiles and continued to boost savings, suggesting the economy was struggling to gain momentum early in the second quarter.
But there are signs a rebound from the first-quarter’s slump is under way, with other reports on Monday showing manufacturing activity picked up in May for the first time in seven months and construction spending surged in April to a near 6-1/2-year high.
Still, soft consumer spending and muted inflation pressures, after a price index for consumer spending in April recorded its smallest gain since late 2009 on an annual basis, suggest the Federal Reserve will probably not raise interest rates before the end of the year.
“The construction and manufacturing data cast a bit of sunshine on an otherwise cloudy day for economic data. We need to see more of a rebound in growth before the Fed pulls the trigger on interest rates,” said Diane Swonk, chief economist at Mesirow Financial in Chicago.
The Commerce Department said April’s flat reading in consumer spending followed a 0.5 percent increase in March.
Consumer spending, which accounts for more than two-thirds of U.S. economic activity, was also curbed by weak demand for utilities as temperatures warmed up. It had been forecast rising 0.2 percent.
In a separate report, the Institute for Supply Management said its national factory activity index rose to 52.8 last month from 51.5 in April.
The index had been declining since November as manufacturing battled a strong dollar and deep spending cuts in the energy sector in response to a plunge in crude oil prices. A reading above 50 indicates expansion in the manufacturing sector, which accounts for about 12 percent of the U.S. economy.
The index, which was also restrained by labor disruptions at the West Coast ports, was last month boosted by a surge in new orders and factory employment.
Fourteen out of 18 industries reported growth last month, including electrical equipment, appliances and components; primary metals, machinery and transportation equipment.
Another survey from financial data firm Markit showed factory activity improved toward the end of May.
“After transitory weakness in the first quarter, the manufacturing outlook has improved. But the dollar and lower oil prices continue to be a drag on some select industries,” said John Silvia, chief economist at Wells Fargo Securities in Charlotte, North Carolina.
The dollar firmed against a basket of currencies, while prices for U.S. government debt fell. U.S. stocks were modestly higher.
STURDY CONSTRUCTION
Gross domestic product contracted at a 0.7 percent annual rate in the first three months of the year.
But given that a confluence of temporary factors conspired to depress the output figure, including a problem with the model the government uses to smooth seasonal fluctuations, the decline in GDP likely overstates the economy’s weakness.
In a second report the Commerce Department said construction spending jumped 2.2 percent to an annual rate of $1.0 trillion, the highest level since November 2008. The percent increase was the largest since May 2012 and reflected broad gains in both private and public outlays.
Forecasting firm Macroeconomic Advisers raised its second-quarter GDP growth estimate by four-tenths of a percentage point to a 2.0 percent rate on the construction report.
Morgan Stanley lifted its estimate to a 2.1 percent rate from a 1.6 percent pace, while Goldman Sachs bumped up its estimate by one-tenth of a point to a 2.5 percent rate.
The manufacturing and construction reports added to business spending plans, employment and housing data in suggesting some momentum in the economy even as consumer spending and industrial production have been soft.
The weakness in consumer spending is puzzling given that wages are rising and households accumulated hefty savings from cheaper gasoline.
“Most likely, Americans are using their pump price savings to pay down debt, increase the money they put aside and for dining out,” said Chris Christopher, an economist at IHS Global Insight in Lexington, Massachusetts.
In April, personal income rose a solid 0.4 percent and the saving rate increased to 5.6 percent from 5.2 percent in March.
With consumption soft, inflation pushed further below the Fed’s 2 percent target.
The personal consumption expenditures (PCE) price index edged up 0.1 percent in the 12 months to April, the smallest gain since October 2009, after rising 0.3 percent in March.
Excluding food and energy, the core PCE price index increased 1.2 percent from a year ago after being up 1.3 percent in March.
The PCE price indices are the Fed’s preferred inflation measures. The soft readings are in sharp contrast with April’s consumer price index report published in May, which showed a pick-up in inflation over the last couple of months.
The differences reflect medical care prices, which are treated differently in both reports. 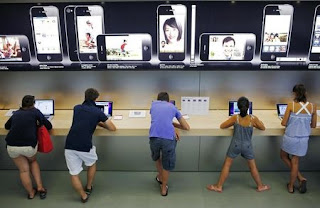 May 30, 1967: Biafra Declares Independence From Nigeria