Share
Facebook Twitter LinkedIn StumbleUpon Tumblr Pinterest Reddit WhatsApp Telegram Share via Email Print
Share
Over the weekend, Singapore Airlines Flight 836, flying from Singapore to Shanghai, lost power mid-flight on both of its Rolls-Royce engines.
According to Flightradar 24, the Airbus A330-343 experienced the problem while cruising at 39,000 feet.
The incident, which took place just south of Hong Kong, caused the airliner to descend 13,000 feet before the crew was able to restart the engines.
The Airbus jet — registration number 9V-SSF — landed safely in Shanghai an hour and a half later.
There were 182 passengers and 12 crew members on board the airliner. No injuries were reported.
According to The Aviation Herald, Singapore Airlines confirmed that the A330 “experienced a temporary loss of power” after encountering some bad weather.
Once on the ground in Shanghai, the two-month-old airliner underwent a batch of tests, but a cause for the power loss couldn’t be determined, The Aviation Herald reported.
Singapore’s Air Accident Investigations Bureau is looking into the incident.
When a jet like the A330 loses an engine, it’s still certified to fly for as long as four hours on the remaining engine. Obviously, when a jet loses both engines, the situation is much more serious. However, pilots are trained to handle it.
The A330-300 is a twin-engine midsize wide-body airliner and one of Airbus’ top-selling aircraft types. The plane that experienced the problem was fitted with two Rolls-Royce Trent 772B turbofan engines
Singapore has 31 Airbus A330-300s in its fleet. They fly routes across Asia and Australia. 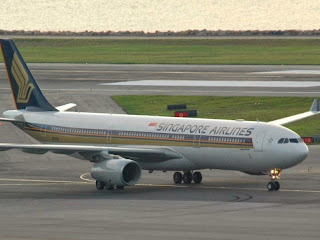